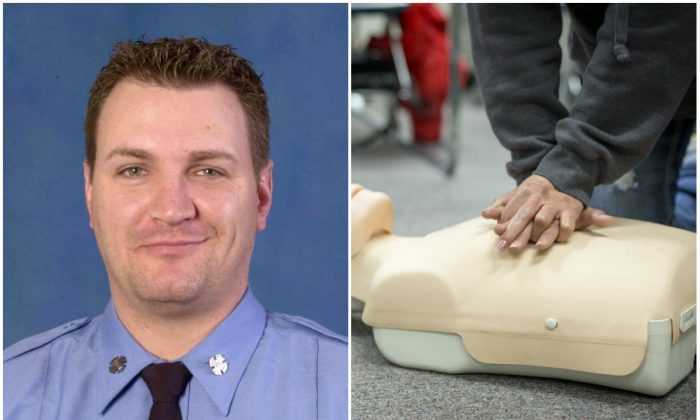 On- or off-duty, it’s good to have a firefighter around. A Queens man was lucky to have one as a neighbor on Sept. 11.

Firefighter Brian Finley of FDNY Ladder 164, had the day off on Sunday when he suddenly heard yelling: “Dad! Dad! Come on, Dad, wake up!”

“I got up and looked over towards my neighbor’s yard,” Finley said, according to a post on the FDNY Facebook page. “I saw a man and woman in their backyard, standing over someone in a chair.”

In a trice, Finley jumped up and ran towards the house. “The man said that his dad wasn’t breathing,” Finley said.

He asked if they called 911. They hadn’t. Finley told them to call right away.

Then, he immediately turned to CPR.

“I laid the man down on the ground and checked for a pulse and for breathing. Both were absent,” he said.

FDNY members took over the patient and he was transported to a local hospital in serious condition.

“The son came over to me and hugged me afterwards, and said he’s so glad that I knew how to do CPR,” Finley said. “I want everyone to know that it’s important to learn CPR. The FDNY teaches CPR classes for free and everyone should learn. In an emergency situation, the earlier you can start doing CPR, the better the survivability rate.”

FDNY runs a Be 911 program that offers free, 30-minute classes on compression-only CPR and urges all New Yorkers to sign up. “The classes are taught throughout the year by certified FDNY EMS personnel at various locations, and can equip you with the skills you need to act in the event of cardiac arrest,” FDNY stated on Facebook.

Two FDNY EMTS Proposed to Their Girlfriends at Graduation Ceremony