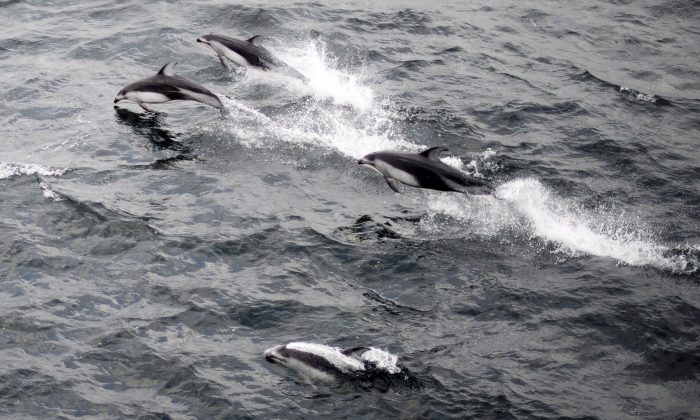 Odd Couple of the Deep: B.C. Dolphins Hang out With Killer Whales

VANCOUVER—Drone flights have revealed an odd couple of the deeps.

Scientists from the Vancouver Aquarium released video footage of dolphins hanging around pods of killer whales, two species that are usually more like predator and prey than Felix and Oscar.

Heartwarming news and a surprising friendship! Ocean Wise researchers observed resident killer whales and Pacific white-sided dolphins hanging around each other while studying the populations with drones last summer. pic.twitter.com/Nb9Z5hPwBh

Biologist Lance Barrett-Lennard says the dolphins have learned to distinguish between resident killer whales and those just passing through.

Barrett-Lennard says researchers have known about the phenomenon for some time.

But he says the drones reveal just how close the dolphins get—sometimes literally right under the killer whales noses.

It is a remarkable discovery as although they are prey for the mammal-eating Biggs (or transient) killer whales—the dolphins show no reluctance to swim near resident, or fish-eating killer whales. As for the resident killer whales, they seem to take the smaller mammals in stride.

The resident whales mostly ignore their smaller cousins, although Barrett-Lennard says sometimes it looks as if the big mammals dive especially deep just to escape the little ones.

He points out the resident whales and transient whales generally avoid each other.

The dolphins seem to have figured out that as long as they’re with the locals, they’re safe.