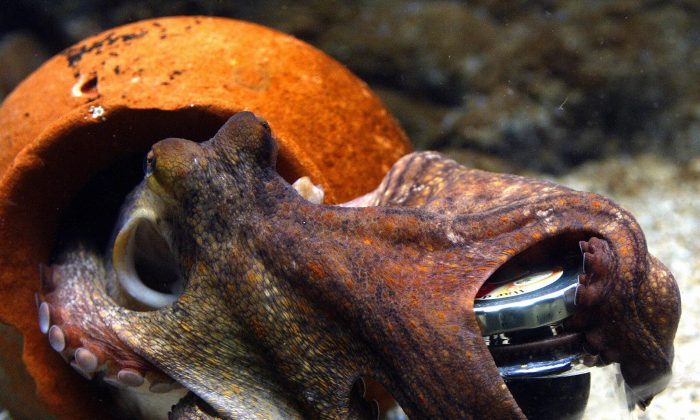 two-month-old octopus (Octupus Vulagaris) tries to unscrew the lid of a jar to get hold of its content, a crab, 23 June 2004 at Denmark's Aquarium in Copenhagen. (JORGEN JESSEN/AFP/Getty Images)
Animals

The Seattle Aquarium, known for its octopus collection, has had an annual tradition for the past decade. Every Valentine’s Day, they set up two of the shape-shifting creatures on a “blind date” and try to have them mate in front of the audience.

But this year, the event was cancelled by the aquarium curators because they couldn’t find a suitable mate for the male octopus, Crosscut reports.

The curators couldn’t find a large enough mate for the male octopus, a 70-pounder named Kong. The 30 to 45 pound females that were available were so small relative to Kong that he might mistake her for food and eat her.

Under the right circumstances, the octopus can be downright vicious, and they have been videotaped attacking and eating sharks.

Like all blind dates, the arranged mating of two octopi doesn’t always result in success, even if they’re the right size for each other. Sometimes they hit it off immediately, and mate within minutes, but on other occasions they may completely ignore each other.

The Giant Pacific octopi at the Seattle Aquarium are terminal breeders, which means they mate only once at the end of their lives and then die, with the female living long enough to see that their eggs have hatched.

For the rest of the year, the octopi are separated from in each by Plexiglas.

In place the of the Valentine’s Day mating ritual, the aquarium will just show Kong swimming around.