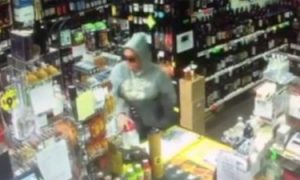 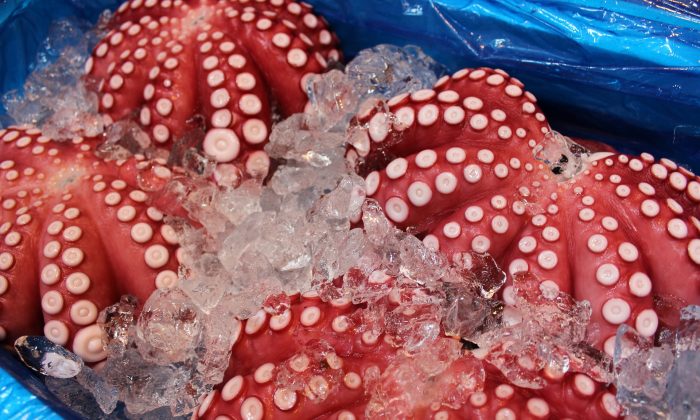 An undated photo showing harvested octopus on ice at a market. A British driver who said he "swerved to avoid an octopus" before crashing his car had taken a cocktail of drugs, a court in the UK has heard. (Pixabay)
Trending

The eight-armed mollusk is placed into a plastic jar and the lid screwed on. The octopus then uses its arms and suction cups to remove the lid.

In 2014, as Scientific American noted, an octopus set “a record for jar opening.”

And it’s been noted that octopi are smart relative to other animals.

“The two of you look at each other. This one is small, about the size of a tennis ball. You reach forward a hand and stretch out one finger, and one octopus arm slowly uncoils and comes out to touch you. The suckers grab your skin, and the hold is disconcertingly tight. Having attached the suckers, it tugs your finger, pulling you gently in. . . . Behind the arm, large round eyes watch you the whole time,” wrote Callum Roberts, who is a professor of marine conservation at the University of York in Britain and the author of “The Ocean of Life: The Fate of Man and the Sea.”

A tourist filmed himself picking up a deadly blue-ringed octopus with his bare hands, and Australian locals said it was a bad idea.

According to News.com.au, the video had Chinese text accompanying it.

“Such a beautiful octopus,” it said in Chinese.

The blue-ringed octopus is one of the deadliest animals and can kill a person within minutes with its venom.

The Ocean Conservancy says the octopus’ “psychedelic coloring and pint-sized packaging make it seem more adorable than alarming. But don’t let its cuddly exterior fool you: this tiny octopus can kill you. And quickly.”

The mollusk is native to the Pacific Ocean and is found in shallow tide pools and coral reefs.

“When not seeking food or a mate, blue-ringed octopuses often hide in crevices, shells or marine debris. If you catch them outside of their cozy hiding spots, it’s easy to see how the animal gets its name: when threatened, bright blue rings appear all over its body as a warning signal to potential predators,” it says.

The venom is about 1,000 times more potent than cyanide and can kill 26 people in minutes, the website says.

“The venom is produced by symbiotic bacteria in the animal’s salivary glands and is more toxic than that of any land mammals. It’s primarily used when hunting: the octopus captures crabs, shrimp and small fish by pecking through its prey’s exoskeleton with its beak and inserting the venom. Then it will use its beak to pick off meat while its prey remains helplessly paralyzed. In the end, only the tough outer shell of its prey remains,” the website says.