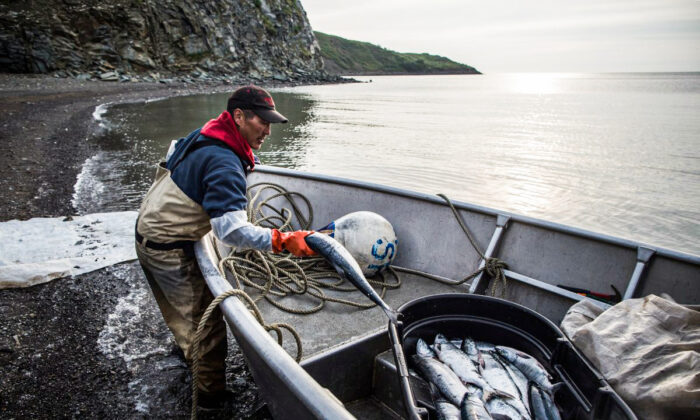 Joseph John Jr. washes freshly caught salmon with his son while waiting for the tide to come in on July 1, 2015, in Newtok, Alaska. (Andrew Burton/Getty Images)
Environment

George said the procedure removed carbon from the atmosphere while restoring fish populations—an approach he made famous in 2012 through the experimental release of iron sulfate into the Pacific Ocean west of Alaska.

He compared iron fertilization favorably with other proposed forms of geoengineering, such as cloud seeding, or dimming the sun.

“It’s a nature-based eco-restoration—we’re talking about restoring nature to her historic level of abundance and health. We’re not talking about reengineering nature with human ideas,” he told ConservAmerica’s Brent Fewell. Fewell is an environmental lawyer who served in the EPA under President George W. Bush.

“It’s not rocket science handling thousands of 50-pound bags of iron-rich rock dust and mixing them in tanks on board my ship,” George later added. He compared scattering that dust across a vast swatch of ocean to plowing a field.

The year after George’s iron fertilization experiment, which he carried out with the local Haida tribe, Alaska experienced what reports described as its largest salmon harvest on record.

In January, the state’s Congressional and Senate delegation drew attention to fishery disasters in Alaskan waters.

Many scientists have turned their attention to iron fertilization-based geoengineering in the past decade.

For example, researchers in Australia have been studying the prospect of iron fertilization in the Southern Ocean, while a South Korean and American team has proposed a similar experiment in that ocean.

George’s remarks came just weeks after the National Academies of Sciences, Engineering, and Medicine (NASEM) released a report on Dec. 9 on the potential of ocean geoengineering for climate change mitigation.

The academies recommended $2.5 billion in additional research funding to study the safety and feasibility of various methods for ocean geoengineering—a sign, perhaps, of greater interest in the approach after years of being seen as taboo by many environmentalists.

While George said the report was “basically giving us an endorsement,” he voiced objections to what he sees as the report’s opposition to leadership on geoengineering from the private sector.

“We’re a private, for-profit company. We’re not looking to feed at the government trough,” he said. “[NASEM] should agree that after 35 years and half a billion dollars of funding out of the United States, we’re ready for version 1.0.”

George’s vision has not always met with such a positive reception. Many critics have warned of the potential unintended consequences of geoengineering the ocean.

One worry is that iron fertilization could promote growth of toxic algal blooms.

Asked about this by Fewell, George said that the technique can only make a difference for ecosystem productivity far away from shore; while iron concentrations in coastal waters can be relatively high due to outflow from rivers, levels of it plummet in deeper waters, meaning a little extra could potentially spark photosynthesis.

“The algal blooms people talk about are exclusively a phenomenon that are in harbors or near shores,” he said.

At the time of George’s 2012 experiment, some scientists and Non Government Organizations accused him of violating that rule, as reported by The Guardian.

The language in that moratorium asks CBD parties, “according to national circumstances and priorities,” to effectively ban most forms of ocean geoengineering, except small-scale experiments in controlled settings. The United States has not signed on to the CBD.

George told Fewell that iron fertilization is not illegal under any jurisdiction, citing the new NASEM report. That report emphasized the non-binding nature of the 2010 UN moratorium, even on non-research projects.

A December 2021 report from a liberal think tank, the Brookings Institution, highlighted some potential hazards of large-scale geoengineering, including unintended consequences of hypothetical secret geoengineering by non-state actors or governments.

It urged the United States to lead in establishing a new international organization focused on geoengineering.

Steve Koonin, a theoretical physicist known for challenging received wisdom on global warming, described geoengineering as a “Plan B” for climate change that “could be deployed in extremis” in his 2021 book “Unsettled: What Climate Science Tells Us, What It Doesn’t, and Why It Matters.”

Koonin concluded that people are less likely to respond to climate change by curbing emissions or geoengineering than through adaptation, as they have for many thousands of years.

He wrote that his early attempts to investigate geoengineering were resisted by non governmental organizations as well as governments: “The focus was on reducing emissions and any distraction from that goal, especially one that would allow the world to continue to use fossil fuels, was not to be contemplated.”

George voiced a similar perspective on the resistance he has encountered from some environmentalists and, on the other hand, carbon market advocates.

“We’re caught in this squeeze play between people who want emission reduction—the green movement—and people who want to sell emission reductions. They seem to both say, ‘Well, we don’t actually want emissions to be solved by nature. We want it to be a human problem that takes cash to solve.’ Mother Nature is not allowed to participate in taking care of her planet,” he said.

Although ocean geoengineering and similar large-scale carbon trapping approaches are far from universally accepted they have gained more positive attention in recent years, including from climate entrepreneurs.

SpaceX and Tesla Motors founder Elon Musk has funded the $100 million XPRIZE for Carbon Removal, intended to spur innovations capable of removing and sequestering carbon dioxide from the oceans or the atmosphere at gigaton scale.