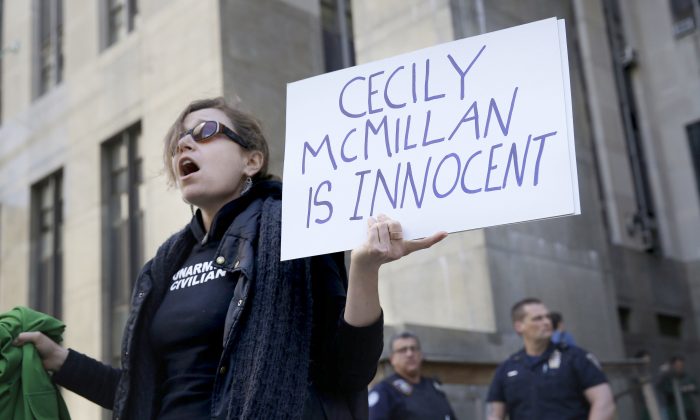 Sarah Wellington stands in front of the courthouse after the sentencing of Occupy Wall Street activist Cecily McMillan in Manhattan, on May 19, 2014. (Seth Wenig/AP)
Crime and Incidents

Cecily McMillan, a 25-year-old graduate student, has been in jail on Riker’s Island since the May 5 verdict in her case. She was charged with assaulting a police officer in a high-profile case that became a lightning rod for activists who have used the case as an example of excessive police force.

McMillan was arrested on March 17, 2012, when activists observed Occupy Wall Street’s six-month mark, as police cleared people from the movement’s former home base in Zuccotti Park. The judge in the case said a protest is no excuse for an attack.

In court, prosecutors showed video of McMillan elbowing a police officer in the eye as he walked behind her. McMillan said in court, and her supporters have maintained, that she reacted out of alarm after her breast was grabbed from behind, which the officer denied doing. It isn’t clear in the video if the officer grabbed her. She also said police treated her roughly while they were arresting her, causing her to suffer what she believed was a seizure.

Although McMillan apologized for injuring the officer, she also maintained her innocence.

“I have been exhausted of almost everything that makes me me, with one key exception: my dignity,” she said.

The verdict brought a mixture of reactions, from shock to relief. McMillan was facing up to 2 to 7 years in prison. Nine members of the 12-person jury had sent a letter to the judge asking for leniency in the case, though it’s not clear if the letter had any impact on the sentence.

Police presence during the trial has been large. At Monday’s sentencing and during earlier court appearances, there were as many as 30 police officers lining the courtroom walls.

InterOccupy, made up of supporters of the Occupy movement, posted a scathing response on its website after the verdict was announced.

“There’s first and foremost a simple and deep sadness for a member of our community who has endured a painful and demeaning physical and sexual assault, and now has had her freedom taken away from her,” read the statement. “And it’s painfully clear to us that Cecily’s case is not special.”

The group’s statement reflected a commonly echoed sentiment among McMillan supporters over what they said is an unacceptable prevalence of sexual violence against women by police. They also said her verdict and the entire scenario points to “over-policing and prosecutorial overreach” by the police and courts.

McMillan’s lawyer, Martin Stolar, said she plans to appeal the verdict and ask for bail while the appeal plays out.