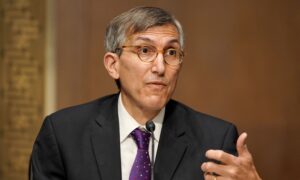 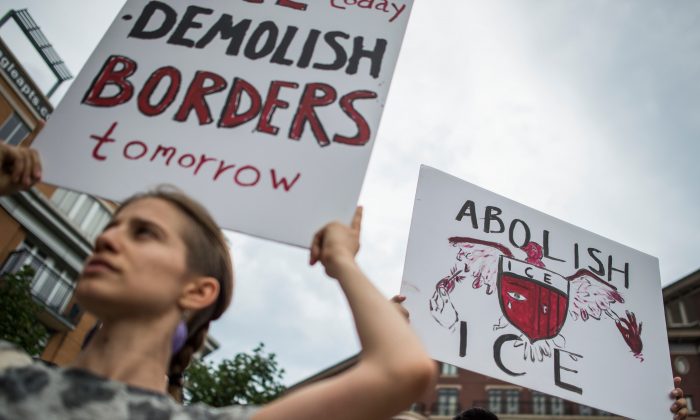 People hold up signs as they protest the U.S. Immigration and Customs Enforcement agency (ICE) and the recent detentions of illegal immigrants, in Washington, on July 16, 2018. (ANDREW CABALLERO-REYNOLDS/AFP/Getty Images)
Politics

An increasing number of Democrats, including the chairman of the Democratic National Committee, are moving to embrace the reinvigorated Occupy movement that is advocating the abolition of ICE (Immigration and Customs Enforcement), reflecting the party’s strategy to energize and expand its growing progressive base.

Occupy ICE is primarily made up of anarchists, socialists, communists, and representatives of Antifa. Meanwhile, the Democratic Socialists of America (DSA) is playing a prominent role in the Democrats’ pro-Occupy strategy.

The DSA, which has active chapters in 47 states and the District of Columbia, is enjoying a surge in membership, now exceeding 45,000.

The organization is an enthusiastic backer of Occupy ICE and other far-left direct actions. The Louisville DSA, for example, facilitated the harassment of Sen. Mitch McConnell and his wife at a restaurant and, in a subsequent tweet, advocated more of the same (“Mitch does not deserve a meal in peace”).

DSA member Alexandria Ocasio-Cortez brought a new level of attention both to her organization and to socialism when she upset 10-term New York Congressman Joe Crowley, the No. 4 Democrat in the House, in a primary election on June 26. She is virtually assured of maintaining this safe Democratic seat in the Congress in the November general election.

Ocasio-Cortez not only supports shutting down ICE, she advocates Medicare for all, free higher education at state colleges and universities, a $15 minimum wage, a federal guarantee of a job for everyone, and the impeachment of President Donald Trump. According to The New York Times, she has emerged as “an instant political rock star” who “has energized the Democrats’ left wing.”

But not only the party’s left wing. DNC chairman Tom Perez, who represents all Democrats, said on July 3 that Ocasio-Cortez, who honed her political skills working for the 2016 presidential campaign of socialist Sen. Bernie Sanders (I-Vt.), represents “the future of our party.”

According to The Hill, Ocasio-Cortez will soon be campaigning nationally and raising money on behalf of other insurgent progressives who want to advance the ideological reboot of the Democratic Party. Her first visit to Washington as one of her party’s nominees is being eagerly anticipated by many of her soon-to-be fellow members of Congress.

On July 16, during an interview with Democracy Now’s Amy Goodman, Ocasio-Cortez doubled down on her support of Occupy ICE. Addressing the issue of minor children who were recently separated from adults and parents who were arrested after crossing the border illegally, Ocasio-Cortez said:

De León is a state senator who is the former leader of the California State Senate. He testified last year that half of his family members who live in the United States are in the country illegally and using fake ID documents. The San Jose Mercury-News reported from the Democrats’ executive board meeting in Oakland on July 14 that “De León appealed to the party faithful by blasting President Trump and embracing policies like single-payer health care and abolishing the Immigration and Customs Enforcement agency.”

The Congressional Progressive Caucus has always leaned left, but its members are increasingly in sync with Occupy and socialist radicals. The CPC is the largest caucus in the House, with 77 Democratic members and one senator, Bernie Sanders.

Sen. Sanders, by the way, according to reporting last month in The New Republic and The New York Times, is now considered to be not far left enough by many Democrats in light of the rise to prominence of an even more radical younger generation of in-your-face socialists represented by the likes of Ocasio-Cortez.

House Majority Whip Steve Scalise (R-La.) commented about the move to abolish ICE, “Democrats have been trying to make July … about abolishing ICE, which is a radical, extreme position that would lead to open borders and undermine America’s national security.”

The radicalization of the Democratic Party around the Occupy movement is occurring at the state and local levels, as well. On July 10, The Intercept broke a story about how “more than 100 state and local elected officials from 20 states”—all of them Democrats—“on Tuesday joined the call to abolish Immigration and Customs Enforcement, adding momentum to a push that, until recently, was dismissed as a fringe left rallying cry.”

The article continued: “In a joint statement, state legislators, mayors, city council members, and county officials made their demand clear: ‘The experiment that is ICE has failed, and must be ended as soon as possible.’

“State senators and representatives from Arizona, Connecticut, Illinois, New Mexico, Rhode Island, and Illinois signed the open letter. … They were joined by officials from dozens of cities in 14 other states and the District of Columbia.”

Last December, the DSA’s convention adopted as one of its top national political priorities “the election of open socialists to office,” including supporting Democrats who are socialists, like Ocasio-Cortez.

Democratic elected officials in cities where Occupy ICE has demonstrated or set up encampments are also vigorously supporting the abolition of ICE and, for the most part, have taken steps to accommodate the demonstrators.

In Portland, Oregon, where Occupy ICE’s tent camp occupation began on June 17, Democratic Mayor Ted Wheeler ordered the police to stand down and not interfere with the large encampment.

Members of the city council, most of whom support Occupy ICE, have said they are looking for a way to cancel the lease on the privately owned building rented by the government to house ICE, as a way of supporting the demonstrators.

On July 6, Philadelphia Mayor Jim Kenney promised Occupy members who have set up a camp outside city hall that they will not be disturbed.

Occupy ICE and an increasing number of Democrats display a bias against law enforcement and favor radical changes in policing and prisons. Portland’s chief of police, Danielle Outlaw (yes, that’s her name), appointed in 2017 by Wheeler, last April ordered her Gang Enforcement Team to stop using its list of active gang members as a proactive policing measure.

In New York, second-term Democratic Mayor Bill de Blasio has been a full-throated supporter of Ocasio-Cortez as well as Occupy ICE and other radical anti-law-and-order proposals.

The party’s leaders apparently see this effort as their best chance to register millions of new voters and motivate both their activist base and rank-and-file Democrats to turn out for the November elections and re-take control of Congress.