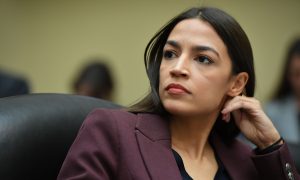 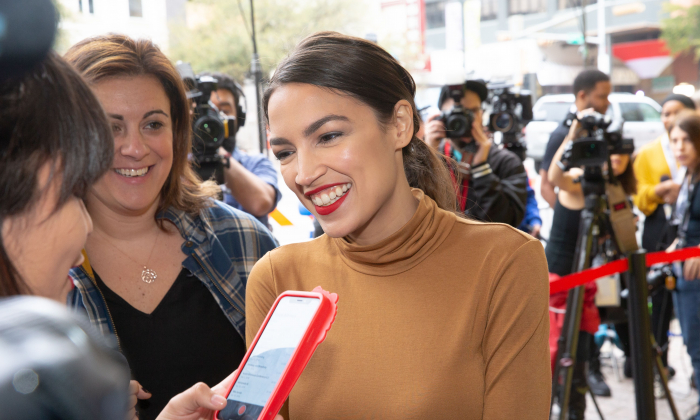 New York Rep. Alexandria Ocasio-Cortez (D-N.Y.) at the "Knock Down The House" movie premiere during the 2019 SXSW conference and Festivals at the Paramount Theatre on March 10, 2019, in Austin, Texas. (Suzanne Cordeiro/AFP/Getty Images)
Politics

The number of Americans who dislike freshman democratic socialist Rep. Alexandria Ocasio-Cortez (D-N.Y.) has soared by 15 points since she pulled off a surprise primary victory in September last year, according to a poll published by Gallup on March 15.

In a survey that Gallup conducted after Ocasio-Cortez won the Democratic primary in New York in September last year, 26 percent of respondents held an unfavorable opinion. Her unfavorable rating has since spiked to 41 percent, based on a survey the pollster conducted in February, roughly two months after she started her term in the House of Representatives.

After her victory last year, Ocasio-Cortez has floated several radical proposals, including raising taxes on wealthy Americans to 70 percent. She is best known for sponsoring the radical socialist Green New Deal resolution, a plan lambasted by prominent Democrats and Republicans alike.

The Green New Deal calls for forcing the United States to completely abandon fossil fuels by taking all gas-engine cars off the road, upgrading or replacing every home, and ushering in an unprecedented expansion of government into the private sector. The plan calls for a Soviet-Union-style 10-year national mobilization, which would cost American taxpayers up to $93 trillion or $650,000 per household, according to one estimate. The Green New Deal is fervently backed by the Democratic Socialists of America, the biggest socialist group in the United States, and the Communist Party USA.

While her unfavorable rating spiked, Ocasio-Cortez has earned a significant amount of name recognition. While half of American adults were unfamiliar with her when she was a primary-winner in September, only 29 percent didn’t recognize Ocasio-Cortez in the February survey.

In total, 31 percent of American adults viewed Ocasio-Cortez favorably, compared to 41 percent who had an unfavorable view.

Ocasio-Cortez drew national attention after she defeated a 10-term Democrat in a primary and became the youngest woman elected to Congress. Since winning, she has outpaced her colleagues in terms of becoming widely recognized by the public as a freshman member of Congress.

“It’s rare to have a new member of Congress who is so widely recognizable by the public so soon in her career on the Hill. Sens. Ted Cruz (R-Texas), Marco Rubio (R-Fla.), and Elizabeth Warren (D-Mass.) each made big splashes when they were elected earlier in the decade, but even after each of their first 18 or so months in the Senate, most Americans had never heard of them or had no opinion about them,” wrote Justin McCarthy, an analyst at Gallup.

“By contrast, Ocasio-Cortez is known by most Americans at this point, despite having only two months on the job as a House freshman. The only more recognizable member so early on was Hillary Clinton in 2001, who was already well-known from the previous decade as first lady,” McCarthy added.

Ocasio-Cortez’s rise to prominence parallels that of former House Speaker Newt Gingrich who gained national recognition during the Republican takeover of Congress in 1994, according to Gallup. Like Ocasio-Cortez, Gingrich became a household name while more people held an unfavorable view of him.