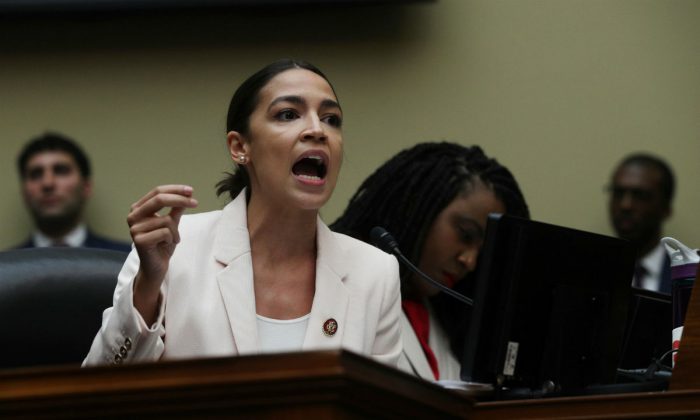 Rep. Alexandria Ocasio-Cortez (D-NY) speaks during a meeting of the House Committee on Oversight and Reform on Capitol Hill in Washington on June 12, 2019. (Alex Wong/Getty Images)
US News

Rep. Alexandria Ocasio-Cortez (D-N.Y.) may be facing a lawsuit soon after former Democratic New York Assemblyman Dov Hikind said he plans to sue the freshman congresswoman for blocking users on Twitter for their opposing views.

Hikind told Fox News that he is preparing a lawsuit against the Democratic lawmaker and that they were in the process of sorting out details. Ocasio-Cortez has blocked several prominent commentators and journalists over the course of the year who do not align with her views points, including Hikind.

This follows a federal appeal court ruling on July 9 that found President Donald Trump violated the first amendment when he blocked users from viewing and commenting on his Twitter messages.

Hikind told the news outlet that he thinks that his claim would be similar to the one against Trump, adding that it will focus on Ocasio-Cortez’s popular personal @AOC account, which has more than 4.6 million followers. Ocasio-Cortez uses the @AOC account to posts about her policies like the Green New Deal and her political stances on a range of issues.

“She uses that account for political/policy commentary, so to shut a citizen off from her statements is a problem—as well as blocking me from petitioning her or seeking redress,” the former assemblyman said.

The freshman congresswoman also maintains an official @RepAOC account, which only has 171,000 followers.

In the appeal court case against the president, the court ruled that Trump’s Twitter account, which has over 60 million followers, is operating as an official rather than a personal one, and determined that using Twitter’s block feature was the same as a government official excluding people he or she does not agree with from a public forum.

“We do conclude … that the First Amendment does not permit a public official who utilizes a social media account for all manner of official purposes to exclude persons from an otherwise‐open online dialogue because they expressed views with which the official disagrees,” Judge Barrington D. Parker wrote for the majority (pdf).

“This debate, as uncomfortable and as unpleasant as it frequently may be, is nonetheless a good thing. In resolving this appeal, we remind the litigants and the public that if the First Amendment means anything, it means that the best response to disfavored speech on matters of public concern is more speech, not less,” Parker concluded.

The court rejected Trump’s lawyer’s argument that the president was using his account in a personal capacity. Parker said the account was private before Trump became president but after he took office, it was being used “as a channel for communicating 2 and interacting with the public about his administration” and bears “all the trappings of an official, state‐run account.”

Kelly Laco, a spokeswoman for the Department of Justice, said they were disappointed by the court’s decision.

Ocasio-Cortez has blocked several prominent journalists and commentators from viewing her tweets including OANN’s Liz Wheeler.

“Omg hahahah [AOC] blocked me! I am ALWAYS respectful & civil. I present facts only, nothing personal. Somebody is threatened by facts & the truth!” Wheeler wrote on July 5.

I am ALWAYS respectful & civil. I present facts only, nothing personal. Somebody is threatened by facts & the truth! pic.twitter.com/IvZPMXKX0i

She finally blocked me and it was after I called out her latest set of lies pic.twitter.com/9mjrBBjDVv

The Daily Caller also reported that their Twitter account had been blocked by the Congresswoman after the news outlet contradicted her about a claim relating to her Green New Deal proposal.

On July 9, Hikind posted on Twitter “See you in court [AOC]” while sharing an article about the expected lawsuit.

He also asked other Twitter users who have been blocked by Ocasio-Cortez to get in touch with him in a separate post.

“If you or anyone you know has been blocked by @AOC please get in touch with me ASAP!” he wrote.

If you or anyone you know has been blocked by @AOC please get in touch with me ASAP! https://t.co/X09n5DtY1v