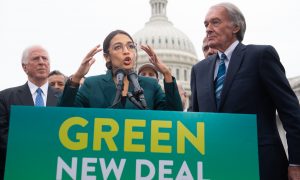 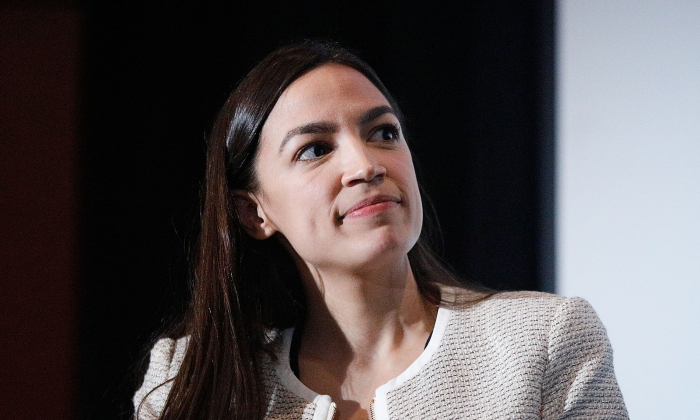 Ocasio-Cortez introduced the socialist Green New Deal resolution in the House of Representatives on Feb. 7; an accompanying resolution was introduced to the Senate the same day. In March, Senate Majority Leader Mitch McConnell (R-Ky.) scheduled a vote on the resolution.

“The GOP’s whole game of wasting votes in Congress to target others ‘on the record,’ for [legislation] they have no intent to pass, is a disgrace,” Ocasio-Cortez wrote on Twitter.

“Stop wasting the American peoples’ time + learn to govern. Our jobs aren’t for campaigning, & that’s exactly what these bluff-votes are for.”

Republicans are eager to put Democrats on record as voting for the Green New Deal. The resolution urges Congress to hand the government a monopoly over the U.S.’s energy industry in order to move the nation entirely away from fossil fuels.

The Green New Deal calls for a Soviet Union-style 10-year mobilization, which would take all gas-engine cars off the road and upgrade or replace every home and commercial building in the United States.

By one estimate, the Green New Deal would cost U.S. taxpayers up to $93 trillion over the course of the mobilization. In comparison, the total projected government spending for the next 10 years is $66 trillion.

The Democratic Socialists of America, the largest socialist group of the United States, and Communist Party USA are both supporting the Green New Deal.

In an interview with Seth Meyers, Ocasio-Cortez pointed out that the Green New Deal is a resolution rather than a bill, describing it as a broad vision for addressing climate change. Ocasio-Cortez then listed several other socialist policies as part of that vision, including “Medicare for All” and tuition-free public colleges.

Republicans view the Green New Deal as a sign of a far-left shift within the Democratic Party and see a vote on the resolution as an opportunity to put all Democrats on the record about the resolution.

President Donald Trump threw down the gauntlet to socialists in the United States during the State of the Union Speech, telling the nation, “America will never be a socialist country.” The president also lambasted the Green New Deal shortly after the resolution was rolled out.

“I think it is very important for the Democrats to press forward with their Green New Deal. It would be great for the so-called ‘Carbon Footprint’ to permanently eliminate all Planes, Cars, Cows, Oil, Gas & the Military—even if no other country would do the same. Brilliant!” Trump wrote on Twitter.

While backing the Green New Deal, most Democratic candidates for the White House have distanced themselves from the socialist label. Only Sanders remains committed to the label. O’Rourke did not disavow socialism under repeated questioning.

Only 18 percent of Americans view socialism in a positive light, according to a poll by The Wall Street Journal and NBC News.