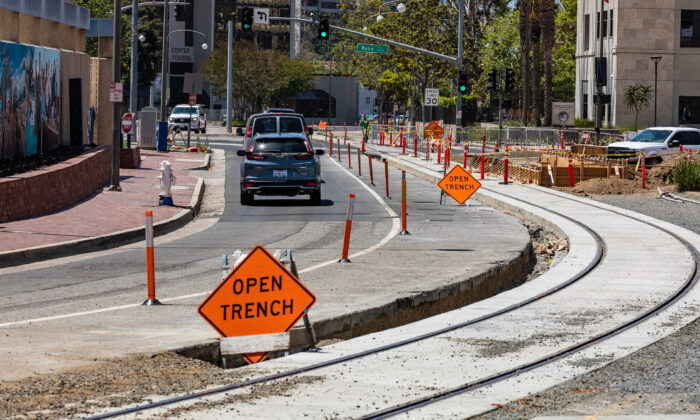 ORANGE, Calif.—The Orange County Transportation Authority announced May 23 that it has been working to help attract customers to downtown Santa Ana businesses impacted by the OC Streetcar project.

The streetcar, a $509 million project, is set to become Orange County’s first modern electric streetcar, providing residents a 4-mile route from Santa Ana’s downtown to Garden Grove, with 10 stops in each direction.

But the project’s construction has apparently given businesses on 4th Street quite some trouble since its inception, with owners reporting their buildings becoming dirty from construction, endless noise, safety hazards, reduced nearby parking, and more, which has caused a loss in sales for the businesses.

Some have reported that many customers are not even aware that the businesses on 4th street are still open due to the construction.

In response, the Orange County Transportation Authority (OCTA) updated members during its board of directors meeting about all the ways in which they are helping the impacted businesses.

To start, the transportation authority is expanding on their “Eat Shop Play” program, which was created specifically to help the impacted businesses, with 78 businesses that have entered the program so far.

“Not all businesses in downtown Santa Ana have chosen to participate,” Christina Byrne, OCTA’s public outreach department manager, said during the meeting. “We constantly strive to provide value to participating businesses by offering free professional photography for their own use on their personal website and promotional materials for their business.”

In addition, the transportation authority is utilizing large digital signs that face roadways, called marquees, which are updated every few weeks to promote different businesses. They are also placing different types of handouts inside OCTA buses that advertise Eat Shop Play businesses.

Byrne also placed importance on diversifying their advertising in order to reach audiences beyond Santa Ana, which warranted them including English and Spanish print and radio advertisements, which helps businesses who decided not to join the Eat Shop Play program. These advertisements come on top of the social media advertisements they were doing previously, all paid for by the transportation authority.

Other types of ads include those on CCTV inside of Santa Ana buildings and the DMV, those in Frida Cinema, mall kiosk advertising, lobby displays, and more.

They are also running geofencing ads in digital media, which have had more than 300,000 impressions, according to Byrne.

OCTA has also implemented a streetcar outreach team, which maintains a monthly calendar of events, such as information tables and lunch meetups, with team members meeting with business owners to answer questions and provide information.

Not everyone is still happy though, as some business owners called for reparations last month.

Others plead for more support.

“I am here today along with others to plead for your help support and compassion,” Renee Lancaster, CEO of Nova Academy in Santa Ana, said during the meeting, noting that a “staging area” where construction materials are held has blocked evacuation routes. “Imagine you walking out your door and your main street is filled with construction or a fence in front of your school. Remember, each one of your children who attended school had a fence with construction for the past two years.”

Lancaster said they have been pleading for the staging area’s removal for over six years, which has blocked evacuation routes, caused construction noise that disrupts learning, and transients have been leaving trash and debris behind.

“The problems we are experiencing due to the site are escalating, and it’s only a matter of time before we are meeting under much more tragic circumstances,” she said.

The streetcar project is set to be finished in early 2024.