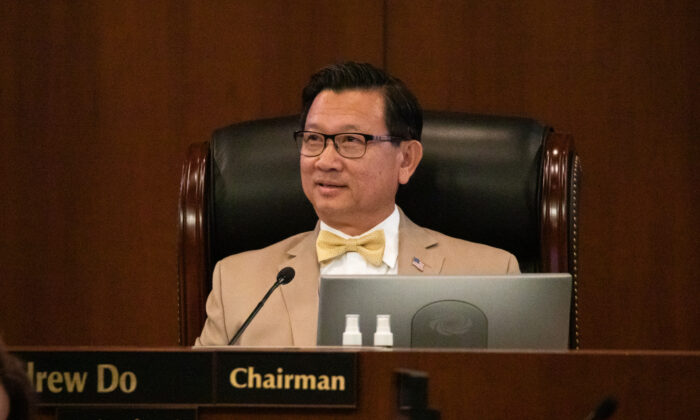 Orange County Supervisor Andrew Do faces a penalty of $12,000 for allegedly overstepping campaign finance rules while serving as a board member on CalOptima, the county’s health insurance agency.

Officials with the state’s Fair Political Practices Commission in Sacramento will consider approving a stipulated order July 21 that charges the supervisor with six counts of violating California’s Political Reform Act.

In the order (pdf), the state commission claims that Do steered lobbying contracts to political donors during a bidding process to CalOptima’s federal and state lobbyists from 2016 through 2018.

The supervisor served as a member of a selection committee and participated in awarding contracts to CalOptima’s lobbying firm. Some of the lobbying firms involved in the process had contributed to Do’s campaign.

Do received two campaign contributions which totaled $2,800 from CalOptima’s federal lobbyist. Do was appointed to CalOptima’s board of directors a year later in June 2016. Two months after, the lobbyist gave Do’s campaign another $1,900, according to the order.

Then in September 2016, CalOptima sought bids from lobbyists for a new federal lobbyist services contract.

Do violated state pay-to-play rules when he voted to extend the lobbyist’s contract, according to the commission.

Do attempted to avoid a conflict of interest with the bid and CalOptima did not notify him of any conflict at the time, according to the state order.

Also during the contract process, Do recommended approval of a contract with another lobbying firm for $24,000 a year after its owner made campaign contributions to the supervisor for a total of $3,800. The firm gave his campaign another $4,000 following the action, according to the commission.

“In this manner, Do made, participated in making, and attempted to use his official position to influence a governmental contracting decision involving a participant who contributed to his campaign,” the order reads.

Do reviewed his campaign contributions and determined that the firm’s contributions potentially violated the pay-to-play rules, according to the order. He asked the CalOptima chairman to remove the recommendations from consideration and the chairman agreed. The board restarted the bidding process at a February 2018 meeting.

Other violations involve contributions made by medical groups, which contributed to Do’s campaign while they had contracts with CalOptima. Do was required to report the contributions but filed them late, according to the order.

According to the state’s Political Reform Act, Do should have disclosed the contributions and abstained from voting on the contracts. He is also charged with failing to report campaign payments in excess of $5,000 in 2015 and 2016.

He has agreed to the penalty and findings and has paid the $12,000, the commission’s spokesman Jay Wierenga told The Epoch Times.

If the commission approves the settlement, the funds will go toward the state general fund.

The original penalty was reduced from $30,000 after the agency found that Do’s actions were not intentional and he tried to correct his actions, according to the order.

“In this case, the violations appear to be the result of negligence by a public official and there is no indication that Do’s actions were intended to conceal, deceive, or mislead,” the order read. “As to the pay-to-play violations, Do contends that CalOptima staff failed to notify him of the potential conflicts and, once he discovered the issue, he took corrective action.”

Do, a Republican, ran for state treasurer this year but was eliminated from the race during the primaries. He has served as a county commissioner since 2015.