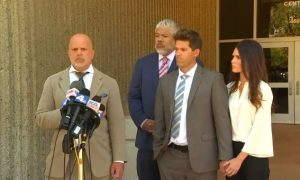 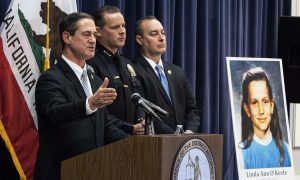 A body was found in the backseat of the pickup truck driven by murder suspect Abdulaziz Alubidy. (Courtesy of Anaheim Police Department)
Southern California

Orange County, California, prosecutors filed a murder charge on Aug. 4 against Anaheim-resident Abdulaziz Munther Alubidy, accusing him of killing a woman whose body was discovered in the back of his pickup truck after a collision in north San Diego County on July 31.

The body was found after the truck crashed into another vehicle at the intersection of San Marcos Boulevard and Rancho Sante Fe in San Marcos around 4 p.m. At least one person was taken to a hospital following the crash.

Jessie Villesca, 56, also of Anaheim, was identified as the deceased woman found inside the cab of Alubidy’s gray 2018 Toyota Tundra.

According to an Aug. 2 Anaheim Police Department press release, Villesca’s injuries led investigators to suspect she was the victim of a homicide.

San Diego Sheriff’s homicide detectives found evidence pointing to Villesca having been killed near West Corporate Way and North Muller Street in Anaheim earlier in the day on July 31, according to the press release. Anaheim homicide detectives then took over the investigation.

Police believe evidence shows a link to the relationship between Villesca and Alubidy as a possible motivation behind the crime, Carringer said—but details are few, and the investigation is ongoing. The press release listed the suspect’s age as 28 years old, though reports vary.

Alubidy allegedly tried to run from deputies and had to be subdued with a Taser, the prosecutor said.

The suspect was booked into the Anaheim Detention Facility and initially denied bail, Bokosky said. A judge will reconsider bail at Alubidy’s arraignment, which is scheduled for Aug. 19 in the jail courtroom in Santa Ana.

Alubidy is originally from Iraq and has been in the country since 2014.