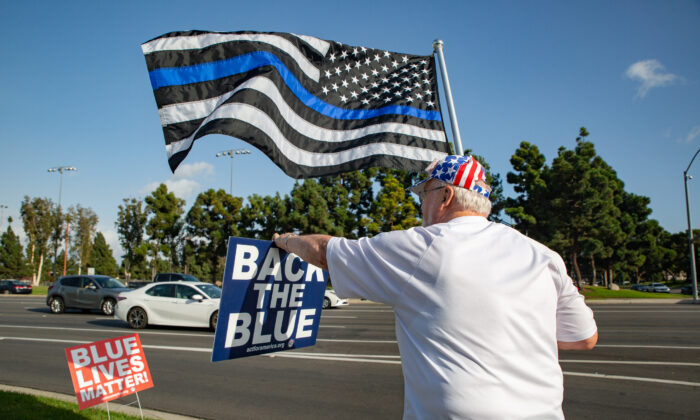 At the corner of Alton Parkway and Culver Drive in Irvine, California, American flags and signs showing support for law enforcement were waved by seven Orange County residents, breaking the visible afternoon routine of the intersection’s daily commuters on Oct. 11.

By email, rallygoers were told to “come as they are” and to “stay for as short or as long as they wished.”

“ I am well aware of the hard work and dedication those who enter law enforcement bring to this often-thankless job,” Irvine resident David Whitley told The Epoch Times.

“A patriotic presence in a city that is becoming more and more blue.  A stand of solidarity with our law enforcement for the great job they do in the face of its inherent dangers and the push to marginalize them as violators of rights rather than defenders of freedom and justice.”

They were also invited to show appreciation by bringing flags, which were also stockpiled for those participating to borrow.

Supporters arrived shortly before the 4:00 p.m. Patriotic Pro-Law Enforcement Rally, held on Columbus Day/Indigenous Peoples Day, which according to Whitley was chosen for two reasons.

“It’s a holiday, so we figured more people would be available to attend”. Whitley continued.

“And we support the great men and women of western civilization who have brought us the great prosperity and liberty by their sacrifices against all odds.”

Near the intersection in the quiet parking area of a T-Mobile store, rally organizer Bob Gast, of Irvine, sat in the back of his SUV loaded with American flags, along with flags and signs exclaiming support for law enforcement.

“Law enforcement is so unrecognized to the safety that they provide to our community and it’s overdue that they don’t receive the recognition that they deserve,” Gast told the Epoch Times on Columbus Day.

“We’re doing this on a Monday holiday, and we know that the number of people going to show up is going to be pretty small, but that doesn’t matter. In law enforcement, you forget that it’s a family unit with the kids and the moms and the dads all supporting each other and that’s so important.”

“That’s why really we want to bring attention and honor these families.”

Among the small but happy crowd of flag-wavers was state director of Blexit California Barbara George, who also brought along her 10-year-old daughter Hannah to wave flags for traffic at the intersection’s edge.

“We want to support and back the work of law enforcement today because they are the unsung heroes, who I have no idea why, have chosen to serve others and put their lives on the line,” George told The Epoch Times.

“Because what person in the right mind responds when a total stranger calls them in the most extreme of situations and puts their life on the line for them!

“I thank them. I commend them, and I support them.”

With multiple honks in support from cars, a small SUV of young men driving past the flags on Alton Parkway shouted negative slurs continually as they drove down the road.

Almost immediately after, the small crew was greeted by more car honks in support.

“It is important, fun, and uplifting to not only rally with like-minded neighbors, but it is equally important to show the public that they are not alone in their views of traditional values,” Whitley concluded.

“The great benefits we are blessed with because in the past men and women did extraordinary things, took unimaginable risks, made amazing leaps—for which we are the benefactors.”

As the brief rally concluded, Gast gave away multiple American flags to participants to take home with them.