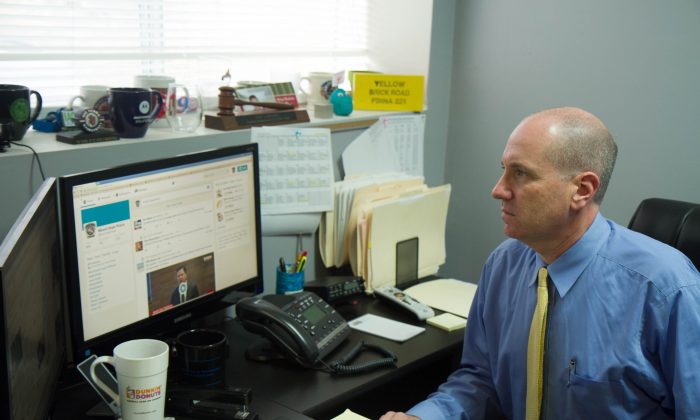 It’s not a part of any job description, but many police departments, fire departments, and other first responder agencies have added social media management to their list of weekly, if not daily, to dos.

In a national survey of 553 police departments in 44 states, the International Association of Chiefs of Police (IACP) found that 96.4 percent of agencies were using social media in 2015, and of the 23 that were not, 17 said they were contemplating it.

Due to his interest in technology and social media, Rickard has been one of the forerunners in the county when it comes to law enforcement and social media. Rickard set up the department’s Facebook and Twitter accounts in 2012, and is one of the few that has Instagram and Youtube. Time and manpower permitting, he would like to be on Google+ as well.

Rickard sees social media as another tool to reach more people more quickly when an emergency happens, as well as disseminate accurate information straight from the source.

“We want to build our followers today so that when an emergency strikes, like that blackout a few weeks ago, we have our followers,” he said.

On the evening of Dec. 4, tens of thousands in Orange County were without power due to an equipment failure at a substation in Middletown. Mount Hope was one of the few police departments in the county giving updates on Twitter, even though the blackout hardly affected the Mount Hope area.

Twitter has proven a helpful addition to Nixle, an emergency messaging system that works through text messages that the town has been using. Mount Hope still has it, but with only 50-60 people in the town signed up for it Rickard estimates, its effectiveness is limited. Between Twitter and Facebook, the department has almost 1,400 followers, and the PSA vieos he posts are getting several thousand views each.

“Once you get in people’s consciousness, that they know you’re there, they just add you to the list, and they start following you,” he said about the videos’ surprising popularity.

The other thing he likes about social media is that he doesn’t have to rely on traditional media to get information out. He can publish a firsthand account from the police department and TV stations will even pick up his videos, which he says minimizes the risk of being misquoted.

We want to build our followers today so that when an emergency strikes, like that blackout a few weeks ago, we have our followers.
— Paul Rickard, Mount Hope Police Chief

In response to feedback from seniors who do not use social media, he connected the Youtube and Twitter accounts with the department’s website so that whatever he posts gets automatically uploaded to the website. This not only reaches different demographics, but updates the website faster than if he were to update it the traditional way, which Rickard said usually takes about a day.

It used to be that only first responders were privy to the fire calls being made in Orange County, but with the advent of Facebook accounts like Orange and Rockland County Fire, that has all changed.

Tom Godoy, a resident of Salisbury Mills, created the Facebook page in 2013 and now administers it with 10 other volunteers in both counties. He says there is about a 30 second turnaround time between when a call comes in and when it gets posted on Facebook, and the response from the public has been overwhelming.

What started as a private cell phone chat between friends exploded when Godoy put it on Facebook. The page now has 17,785 followers, and that number keeps going up.

“My wife, she saw me start this page and she wasn’t too happy about it at the beginning, but she’s seen how big it’s gotten in three years, going on four, and she’s actually supportive,” Godoy said.

The page picked up over 1,000 followers during the recent blackout.
— Tom Godoy, Admin of the Orange and Rockland County Fire Facebook page

The page picked up over 1,000 followers during the recent blackout through word of mouth, Godoy said, and in the next few years, his goal is to increase the number of followers to 100,000.

Besides providing info about when the power would be restored, he said he helped dispel rumors about looting in Middletown after contacting some friends he had in the 911 Center.

“Myself or my guys screen everything that comes in from private parties,” Godoy said. “We have to do our homework on our end, we can’t just go by what people are saying.”

And that is part of the recipe of their success. He says a lot of fire departments follow his page and are supportive of what his group does because they verify information and follow guidelines as to what they post and don’t post: no names or addresses for medical emergencies, no photos or descriptions of cars in accidents or license plates, he said.

But besides being a source for information, Godoy said the constant updates they post, which are only a small fraction of the calls that come in, show just how much first responders do.

“[We want to] show people that have no sense of anything emergency-related what the volunteers do day in and day out,” Godoy said.

[We want to] show people that have no sense of anything emergency-related what the volunteers do day in and day out.
— Tom Godoy, Administrator of the Orange and Rockland County Fire Facebook page

There are several other pages like his, such as Orange County Fire Calls and Orange County Fire Media, which are not updated as frequently and don’t have as many followers but provide a similar service. Godoy acts as an advisor to one of them, and says he welcomes more as long as they don’t try to compete.

“If they want to play the whole ‘I was here first’ type then I just separate myself from it,” he said.

When asked if using social media improved police/community relations in their jurisdiction, 83.5 percent of the IACP survey respondents said they thought it did.

That was the impetus behind the Middletown Police Facebook page, said Lt. John Ewanciw. “It’s more of a promotional tool to show the positives that are going on within the department,” he said.

“It’s to develop a community base,” added Christine Dugan, the confidential secretary to the chief and the one who started the department’s Facebook page back in 2010.

They mostly post awards, events, departmental changes, and other things to “let people know what we do on the inside,” Dugan said.

It’s to develop a community base.
— Christine Dugan, Administrator of the Middletown Police Department Facebook page

Even though they don’t use it as a crime-fighting tool, they do get tips through Facebook, something that 76 percent of the survey respondents said they used social media for.

Port Jervis Police Chief William Worden said they get tips daily through the private messaging feature on their Facebook account. This fits in with the department’s goal to have the police be the community and the community be the police, he said.

“The information that is flowing from the community is at it’s highest,” he said, directly connecting it to the drop in burglaries this year.

The information that is flowing from the community is at it’s highest.
— William Worden, Port Jervis Police Chief

The driving force behind a lot of the burglaries in the city is drugs, and “most commonly, [the tips are about] someone suspected of drug trafficking,” he said.

The nice thing about getting tips through Facebook, Worden said, is that people can share photos and video, which is invaluable information they might not have gotten via phone.

He said sometimes people rely in social media too much though and report emergencies via Facebook. The department is not yet set up to respond to Facebook messages instantaneously, so in the case of an emergency, it is still better to call 911, he said.

Another way first responders are reaching out to the public through social media is chats, like the New York State Police’s “Twitter Town Halls.”

These are a time when the public can ask questions and engage with officers on social media in real-time at a specified date and time.

Another way first responders are reaching out to the public through social media is chats.

The success varies by topic, said Kristin Lowman, a public information officer with the state police, but she feels it has been a valuable way to get information to the public.

“There’s a lot of retweeting and following of the different answers of the tips of the facts that we put out there,” Lowman said about the Twitter Town Halls.

Rickard said starting in February, the Mount Hope Police will be holding a Twitter chat as well.

“People don’t have time to stop and call the police about non-emergency stuff but you might have two seconds to Tweet,” Rickard explained.

As with all initiatives to improve relations in the community, it takes someone to do it, and therein lies the challenge.

Godoy started his page after he sustained an injury 6 years ago and was forced to retire. He sees the time he puts into the page as his contribution to the fire department, but is having trouble finding more people with the same dedication and time to put into it.

Rickard is looking for a social media intern to expand and improve some of the social media initiatives he has started, and has even talked to several colleges in the area about giving college credit for it. He also hopes to get more people in the department involved, so that at some point in the future, “all our information is real time,” he said.

He learned the hard way what it means to be the sole administrator of the department’s Facebook page when a couple years ago, a distracted driver ran into a herd of cows in Mount Hope and two of them had to be euthanized.

A common complaint amongst police chiefs is that they lack staff dedicated to social media, and Port Jervis is no exception.

Rickard said the woman was getting death threats, as was he, and “it became my full time job to edit Facebook,” he recalled.

He hopes that some of his staff, especially the younger ones, will take an interest in it so it isn’t just him and “you would be able to get the Mount Hope Twitter voice from different people.”

Worden said his New Year’s resolution is to get the department back on Twitter, put their crime maps on social media, and use Facebook and Twitter to reduce some 860 outstanding warrants. To this end, he is making scheduling and staffing changes to increase the number of officers who can update the department’s social media accounts.

He says it is a common complaint amongst police chiefs that they lack staff dedicated to social media, and Port Jervis is no exception.

“That is something that, as technology evolves, and as the information that is available to people evolves, the need for police departments to obtain more technology-based employees that can operate social media [increases],” he said.