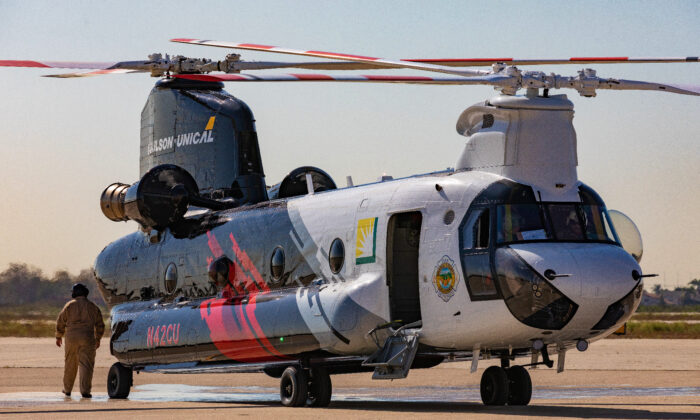 The Orange County Fire Authority's new firefighting helicopter waits on the runway to take off prior to a demonstration of its water-dropping capabilities in Los Alamitos, Calif., on Sept. 30, 2020. (John Fredricks/The Epoch Times)
Southern California

The OCFA revealed its new helicopter, the Coulson Aviation Chinook, reportedly the most advanced helitanker in the world. The firefighting aircraft is capable of carrying up to 3,000 gallons of water in a single trip to drop on wildfires.

Following an introduction ceremony, the OCFA displayed the abilities of the new helitanker, along with its current firefighting helicopter, by loading both with water. After taking off and looping around the base, each dropped gallons of water onto the airstrip.

Capt. Greg Barta opened the demonstration by thanking electricity supplier Southern California Edison for the power company’s $2.1 million dollar donation toward the lease of the helicopter.

“Thanks to funding from Southern California Edison, we now have the most capable, very large helitanker in the world on our team: the Coulson Aviation Chinook behind me.”

Barta told The Epoch Times that the lease of the helicopter will last for 83 days, beginning Oct. 1. He noted that while the fixed standby cost of the lease is $2.1 million, the cost of flight time will be paid for by the requesting fire agency.

OCFA Chief Brian Fennessy discussed the advanced features and capabilities of the aircraft. He extolled the virtues of “the ability to drop 3,000 gallons” of water on a fire—compared to the capacity of the regular OCFA helicopter, which is capable of holding 375 gallons at most.

“This helitanker, it’s a force multiplier,” he said. “Typical fire engines you see on the street carry about 500 gallons. The helicopter behind us drops 3,000 gallons. That is a massive amount of water.”

“This literally is the largest-tank helicopter in the world, and none of them fly 24/7. This aircraft is going to be staffed 24 hours a day. Night vision goggle-rated pilots and aircraft will be available throughout Southern California Edison service turf.”

Fennessy noted that the helitanker will be used all over the state where needed—not just in Southern California.

“As you all know, wildfires have been ravaging the state for well over two months, well before the Aug. 15 lightning storm that ravaged Northern and Central California. LA County had several big fires, and it’s just been nonstop,” he said.

“I believe that we’re closing in on 4 million total acres here in the state of California. The record prior today was just under 2 million, to put it into context.

“The ability to use a helicopter like the one behind me to drop a target, to put a retardant line in at night, is a capability that has not existed until today.”

Fennessy, who has been in the fire service for over 40 years, said he expected the helitanker would begin its first day of work on Oct. 1 by traveling north to help firefighters there struggling to contain raging wildfires.

Southern California Edison CEO Kevin Payne told the crowd it was important for his company to work with OCFA to help improve wildfire risk awareness.

“When our firefighters go into action, they should feel ready and confident they have the most advanced technology and tools—like the helitanker you’re going to see here today—to support them,” Payne said.

He cited “unprecedented safety risks around catastrophic wildfires” up and down the West Coast as part of the company’s motivation to help.

“At SCE, safety remains our first and our highest priority,” Payne said.

“Our company is proud to continue to work closely with the local first responders and emergency managers to help improve wildfire risk awareness and to promote our community’s emergency readiness. And it’s an honor to continue to support the readiness of our fire agencies, such as the Orange County Fire Authority, whose people are on the front lines protecting lives, property, and our critical infrastructure.”