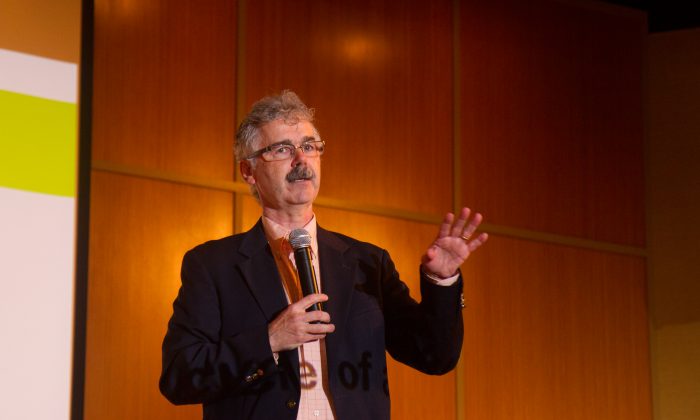 An audience of several dozen heard a panel of domestic abuse survivors tell their stories at the Emergency Services Building Sept. 23. And Safe Homes Executive Director Kellyann Kostyal Larrier spoke about the need for the community and individuals to support victims of domestic violence. Safe Homes of Orange County is the county’s premier organization working to end domestic abuse and human trafficking.

The keynote speaker of the event was David Adams, the co-director of an intervention program and training site for abusive men in Cambridge, Massachusetts, called Emerge.

He started by telling his own story of domestic violence, which he believes put his mother in her grave at age 43 and left him and his three siblings with indelible scars.

He grew up in Plainfield, Vermont, on a dirt road about 5 miles from the nearest town. His father, whose education only went through fifth grade, worked as a granite miner about 9 miles away in Barre, Vermont, and was the breadwinner of the family.

His father was both verbally and physically abusive to his wife and children, Adams said, and would do things like shaming them when they wet their beds, yelling at them during mealtimes, and putting a timer on when they would go to the bathroom and dragging them out when the time was up.

“I still have a lot of self-consciousness about my body [from that],” Adams said. “One of my most common dreams is being caught naked in public.”

His mother coped with her husband’s abusiveness by overeating, he said, and his father used her increasing waistline to make her feel insecure, unlovable, and “lucky to have him.”

She became obese, Adams said, and her heart started giving her problems. After complaining of chest pains, which her husband ignored, she died in 1970 of cardiac failure.

Adams’s youngest sister was the one his father beat the most, he said, and she ended up running away from home and spending her last three years of high school with another family. She later forgot his trespasses, Adams said, and refuses to acknowledge any of the abuse.

“And is even angry at the rest of us for even suggesting that our father was ever abusive,” he said.

His younger brother joined a religious cult and, like his father, secluded himself in a rural part of Maine, taking his children out of school when teachers suspected abuse. His older sister took to alcohol, and Adams, who has a doctorate in education, buried himself in academics “to be as different from my father as I possibly could be.”

After working with abusers for many years, Adams said they are often misunderstood, and broke down some misconceptions people have about them into eight myths.

Most abusers are never identified because they have a different personality to the outside world than with their families. They are typically not the “macho,” hot-tempered type, and do not have a criminal record. Only about a quarter of abusive men are violent.

Myth 2: Abusers have a problem with anger

If abusers were all “rageaholics” they would lose their jobs, go to jail, or face other consequences. Because domestic violence is usually more about control than violence, it is not always easy to see.

Men who abuse are often master manipulators and can be much more charming and “likeable” than their victims. Being able to control and manipulate someone takes a high level of skill.

While this is true for about 20 percent of abusers, another 40 percent are on to the narcissistic end of the self-confidence spectrum, according to a 2000 study by two researchers from Indiana University of Pennsylvania.

Most do not, but the ratio of abusers who have mental health problems to those who don’t is similar to the rest of the population.

Myth 6: Abusers who show remorse are more likely to change

Oftentimes abusers show remorse because of things that affect them, like not being able to get into their houses, not being able to see their children, or other privileges that were taken away because of their behavior. Abusers can use a range of excuses from “They provoked me,” to “I lost control,” to “I’m under a lot of pressure,” to excuse their behavior. They often try to manipulate interveners, and remorse and apologies are part of the strategy.

Myth 7: If the violence has only occurred once, there isn’t a pattern

This can be misleading to law enforcement, family, and friends of victims because they may see abuse as a one-time thing. There are no statistics to show how many times someone exhibits abusive behavior before they are caught, but if it is similar to drunk driving, it can be 200 to 2,000 times.

Myth 8: Just because a guy has abused his partner, it doesn’t mean he’s a bad parent

How a father treats his children, and how he treats the mother of his children are both important. Boys who see their fathers abuse women are more likely to abuse women when they grow up.

While it may seem that abusers are set in their ways, Adams said only about 11 percent of the men who go through his 40-week program relapse, as measured by a new restraining order or rearrest. For those who don’t complete the program, the rate is about 30 percent he said.

It starts with showing abusers how their behavior is hurting them, he said, and over time most develop “enlightened self-interest” and begin to change.

“I see very significant, meaningful change in abusers,” he said. “It’s slow because there are a lot of rewards to being narcissistic, and people want quick fixes … so a long program is important to get them beyond those kind of quick fixes.”