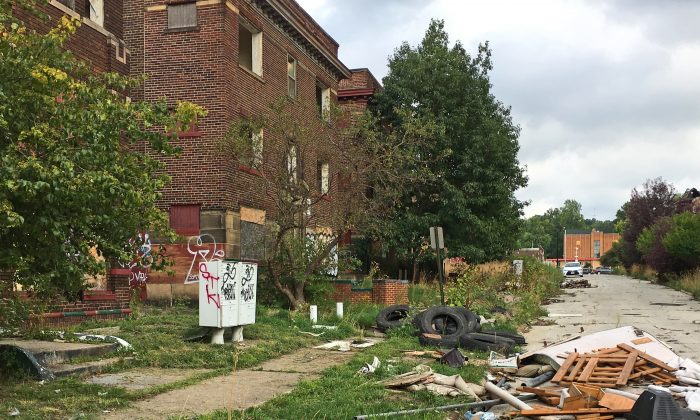 Discarded tires and other refuse pile up on cracked pavement and sidewalks alongside graffiti-scarred buildings with missing windows in East Cleveland, Ohio, on Aug. 31, 2016. Cleveland and East Cleveland, two of the country's poorest cities, are debating whether to merge, with both cities saying the state of Ohio needs to provide millions to begin fixing East Cleveland's infrastructure and finances. (AP Photo/Mark Gillispie)
US

CLEVELAND—Two of the country’s poorest cities are talking about a merger they say could help both, though they may need a sizable boost in taxpayer dollars to make it happen.

In Cleveland, officials are eying development possibilities that exist in neighboring East Cleveland, a place so impoverished that some residents fill their own potholes.

In East Cleveland, City Council members had long balked at the idea of dissolving their city. But with no viable solution short of an economic miracle in sight, they agreed last month to pursue annexation without the list of demands—such as continuing to be paid after annexation—it originally submitted to the dismay of Cleveland officials.

“Without a revenue stream, I don’t know how we would exist,” said Thomas Wheeler, president of East Cleveland City Council. He and mayor Gary Norton agreed their city is out of options and needs money now.

Are Soaring Levels of Income Inequality Making Us a More Polarized Nation?

East Cleveland has millions in unpaid bills and hasn’t been able to borrow money on the municipal credit market for years. The city can barely make payroll even after deep cuts in its workforce. Wheeler said only five firefighters were available to respond to a recent house fire.

East Cleveland residents tired of crumbling streets, abandoned buildings and anxious waits for emergency services appear ready to be absorbed by Cleveland in the hope they will receive basic city services long in short supply.

“They don’t fix anything around here,” Robert Occhionero said.

Occhionero said residents on Savannah Avenue have been filling potholes as best they can to avoid being awakened by the sound of vehicles rattling through them.

Nearby, abandoned homes line the street that Morris Glenn and Anthony Donner call home. Donner cuts the grass on one of the vacant lots across Northfield Avenue because the city doesn’t. Donner said he also clears storm sewer grates to try stopping their street from turning into a riverbed during heavy rains.

The men said East Cleveland has become so dangerous that people have armed themselves, knowing it could be a long wait for police. Call 911, they said, and there’s a chance you’ll be put on hold.

“Nobody wants to live here,” Glenn said. “I’m only here by necessity.”

Despite these problems, some Cleveland politicians are enthusiastic about the possibility of a merger, citing development possibilities along a main thoroughfare that connects East Cleveland with Cleveland’s fastest-growing neighborhood, University Circle, the home of research hospitals, Case Western Reserve University and most of the city’s cultural institutions.

Negotiations by a commission consisting of three members from both cities could begin sometime in the next few months. One thing officials from both cities agree on is the state of Ohio needs to provide millions of dollars to repair East Cleveland’s crumbled infrastructure and to stanch the city’s financial bleeding.

“It’s a small city with big city problems,” Kevin Kelley, Cleveland council president, said of its poor neighbor. “We don’t have the resources to deal with what problems they’ve got.”

There are few signs Ohio is willing to help. Ohio Auditor Dave Yost this year asked the Legislature to approve $10 million to help East Cleveland, a request that lawmakers summarily rejected. Gov. John Kasich isn’t in a giving mood, either, despite the state’s $2 billion rainy day fund that has been bolstered by deep cuts in funding to Ohio communities since he took office in 2010.

“The city of East Cleveland’s complicated financial struggles have spanned decades and despite everyone’s best efforts, little progress has been made to pull the city out of fiscal emergency,” Emmalee Kalmbach, a Kasich spokeswoman, said in a statement.

Cleveland has its own problems. The warm glow of positive publicity after its successful turn hosting the Republican National Convention cannot gloss over its own big-city ills—a shrinking population, entrenched poverty and neighborhoods beset by decay and violent crime.

Cleveland voters are being asked to raise the income tax from 2 percent to 2.5 percent in November to close a projected $40 million budget deficit and to cover the cost of implementing a federal court-monitored consent decree aimed at reforming the Cleveland police department.

“We have a lot of balls in the air in Cleveland,” Kelley said. “We have to approach this responsibly to make sure this is in the interest of all parties.”