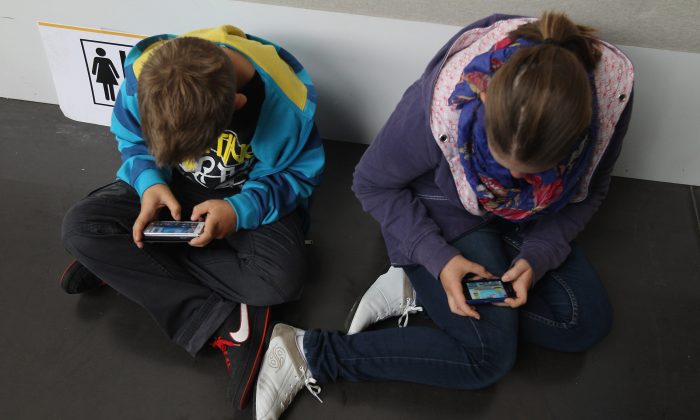 Two children play video games on their phones. The world is seeing an explosion of smart phone usage that will have a long-term impact on human relationships. (Sean Gallup/Getty Images)
Opinion

Something odd I’ve noticed about University of Calgary students and, having just returned from a big American university, about students continent-wide, is the nearly universal use of smart phones and the nearly constant monitoring of Facebook. Smart-phone penetration of the student population must be closing in on saturation. It’s a marvel there are so few collisions.

Last summer CBC reported that social media sites were chiefly a means of boosting one’s ego. “It’s about curating your own image, how you are seen, and also checking on how others respond to this image,” they said. The observation is probably true. Think about the Oxford Dictionary 2013 word-of-the-year, “selfie.” Think about the larger historical context as well.

It all started a generation ago when Walkmans removed music from its original context, the concert hall and the home. iPods continued the transformation of magnificent audible beauty into a commodity, like elevator music. Music no longer requires patience or education to be understood. Asked why they “love” their machines, iPoders most often reply: it gives me control. With control comes pleasure at the end of an ear bud, and no musical surprises.

Young people wielding smart phones, bobbing along in public, entirely absorbed by their own audio feeds, have created a new kind of public space. Christine Rosen, senior editor for The New Atlantis, said they were an “absent presence,” living in the real world but unable to pay attention.

Texting and checking “status updates” on Facebook—an act that also expresses real status anxiety—enhance this absent presence by wasting millions of hours of real persons’ offline lives by “sharing” the most banal intelligence updates with online “friends.” Like selfie, the use of “friend” as a verb is heavy with significance.

Real friendship is a relationship between real persons. They trust one another; they reciprocate and share their interests and sometimes their secrets. Friendships take time to grow. A public, instant friendship is phony, an alliance of convenience with limited and specifiable goals.

One study discovered that Facebook allows teenagers better to “manage their friendships” and to enhance their own status (and status anxiety) by “friending” more and more people whom the friender may never have met. This Orwellian development culminates in robo-friends and “socialbots” who cultivate one another as well as real persons.

In contrast, real friendships involve risk, disappointment, and heartache. Certainly you can be thought an idiot and a real friend will say so. By outsourcing the difficult tasks of gaining real friends and growing in friendship all you get are reliable, well-managed, anonymous, Potemkin friends.

So what? People with smart phones and Facebook see no cultural apocalypse. And yet the deprivations are real.

By being constantly on display, how can you reflect about the person—oneself—whom you are displaying? The pretense that Facebook individuality is evidence of equality ignores the reality that neither persons nor curated images are equally interesting.

By integrating ourselves into the comfortable social technologies that give us what we crave, we make it increasingly difficult to reflect on how we are used by them. Years ago the philosopher George Grant made fun of one of his colleagues in computer science who stated, in all seriousness, “the computer does not impose upon us the ways it should be used.”

If that sentence were true, why would anyone care about the monotony of technological individuality? It reminds me of hippies who, when I was a student, all looked alike in their uniqueness.

George Santayana said it best. “Americans love junk,” he observed. And so do Canadians. Then he added: “it’s not the junk that bothers me, it’s the love.” Loving friendly machines is creepy.

Barry Cooper is a Senior Fellow at the Canadian Defence and Foreign Affairs Institute.