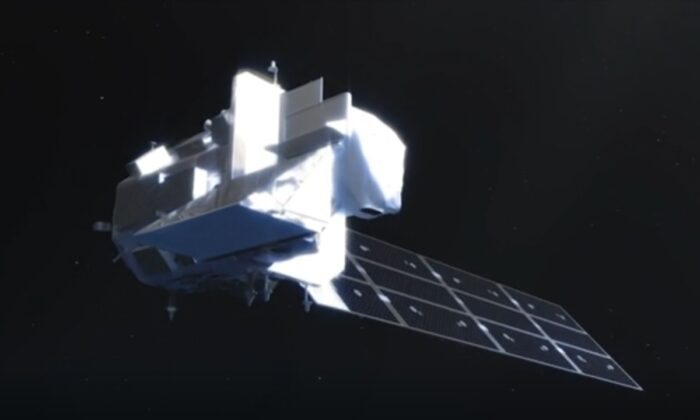 Landsat 9 is shown in this graphic animation. (NASA-USGS via AP/ Screenshot via NTD)
Space

Landsat 9 is the latest in a string of satellites sent up into orbit since 1972. It’s a joint monitoring program run by the U.S. space agency NASA and the United States Geological Survey (USGS).

The Landsat satellites work by collecting light, the intensity of which gives information about what is on the ground. Landsat 9 will be able to see more than ever before, a total of 16,384 different shades of color. According to the agencies, we’ll be able to see more in darker spots like coastal waters and forests.

He says: “We can monitor things that are changing very rapidly on the ground. I think one area, in particular, that’s going to see improvement is looking at water quality. For example, harmful algal blooms are a big issue in the U.S. and worldwide with the improved data quality from the Landsat imagery and getting it every eight days, we’re going to be able to see the early detection of those algal blooms and their evolution much better than we could have before. Similarly, the better image quality is going to help with darker vegetation. So we’re going to get more information about pigments in forests and crops as well.”

That could be vital for areas like Bandar al-Jissah, in Oman. The waves that wash up here are bright green—a phenomenon scientists claim is caused by our warming planet. This is noctiluca scintillans, one of the world’s largest, and oldest life forms.

Swarms of the microscopic creatures beneath the surface of the Gulf of Oman were all but invisible 30 years ago—now they form giant, murky shapes that can be seen from satellites. They wash up across Oman’s long coast in the autumn and again in winter.

The images the satellites have provided in the decades that have followed have allowed scientists a constant monitoring system, a continuous archive of how Earth is changing. The program has provided the longest space-based record of Earth in existence.

The technology of the satellites has improved with each generation.

Masek says: “If you look at the program history over the last 50 years, we definitely are requiring more imagery now than we did at the start of the mission or star of the program or other. But for the last roughly 10 to 15 years, we’ve been getting all of the Earth all of the time. ”

Landsat 9 and the other existing satellite Landsat 8 together take eight days to image the whole of Earth, both the land and coastal areas.

NASA says they’ll be able to give near real-time data of everything that’s happening on the Earth’s surface.

“We’ve amassed an archive of over nine million images. So in a real way, the unique thing about LANDSAT is its longevity and its ability to look at long-term changes to the land environment. Landsat nine in particular. It’s almost a direct copy of Landsat eight, but it does have some technical improvements that are going to improve the image quality that comes down from it as well.”

This gives researchers valuable insight into environmental developments, such as the loss of Amazon habitats, deterioration in water quality, or the increasing urbanization of our world.

Landsat 9 is scheduled for launch into orbit on Sept. 27, 2021 from the Vandenberg Space Force Base.