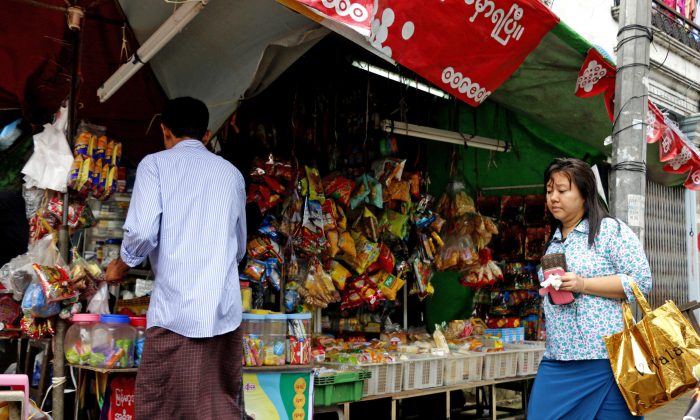 YANGON, Burma—Burma (also known as Myanmar) economists and businessmen on Thursday welcomed President Barack Obama’s announcement that the U.S. will lift economic sanctions and restore long-lost trade benefits to the Southeast Asian country as it emerges from half a century of oppressive military rule.

The nation of more than 50 million is rich in natural resources, and before a military coup in the early 1960s it was among the region’s stronger economies. Today it’s among Asia’s least developed and poorest countries, with more than a quarter of the population living in poverty. Experts hope the lifting of sanctions helps change that by making it easier for U.S. companies to invest and do business here.

“There will be more trading and investment as the result of lifting sanctions on our country. It will really benefit the citizens of this country and be a great hope for Myanmar’s economic development,” said Khin Maung Nyo, a Burma economist.

The United States first imposed sanctions on Burma in 1997, when the military junta ruled. In 2011, the junta gave way to a quasi-civilian government that was dominated by former military officials but still ushered in some democratic reforms, leading the U.S. to restore full diplomatic relations and ease sanctions.

Burma’s new government took power in April after the party led by pro-democracy leader Aung San Suu Kyi won a landslide election victory late last year. The military still retains power in the government, in part through a constitution that effectively bars Suu Kyi from the presidency. She is formally state counselor and foreign minister but is universally viewed as the country’s leader.

Sitting beside Suu Kyi in the Oval Office on Wednesday, Obama said the U.S. will “soon” lift restrictions on military-owned companies and officials and associates of the former ruling junta.

Suu Kyi said it was time to remove remaining sanctions, which have kept U.S. companies and banks leery of involvement in one of Asia’s last untapped markets. But the military still retains major political and economic interests, and some rights groups said the U.S. should continue applying pressure on Burma to change. Massive illegal trade in goods including jade and timber continues, as does civil war with many ethnic minorities.

“Lifting all sanctions now will embolden the Myanmar military and its partners,” said Matthew Smith of Fortify Rights. “This decision was hasty and fails to recognize political realities on the ground.”

Khin Maung Nyo, however, said it is impossible to single out Burma military interests without making the entire country suffer.

“In Myanmar, there are no businesses which are not related to cronies or military. But we do hope that they change according to the political changes, not only for their own profit but also benefiting the country and its people,” he said.

Ye Hein Aung, a member of Burma Center for Responsible Business, said the lifting of sanctions will improve not only imports and exports but banking, and would make Burma less dependent on regional trade.

Khin Maung Lwin, a 60-year-old who sells snacks on the roadside in Yangon, Burma’s biggest city, hoped the changes would be not only wealth but more choices for consumers.

“This is really good, and the economy will grow,” he said. “By lifting sanctions, there will be better-quality import products. We don’t have good medical products and it affects people’s health.”