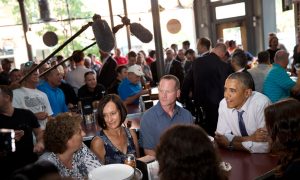 8 Who Wrote Obama Letters to Attend State of Union
0 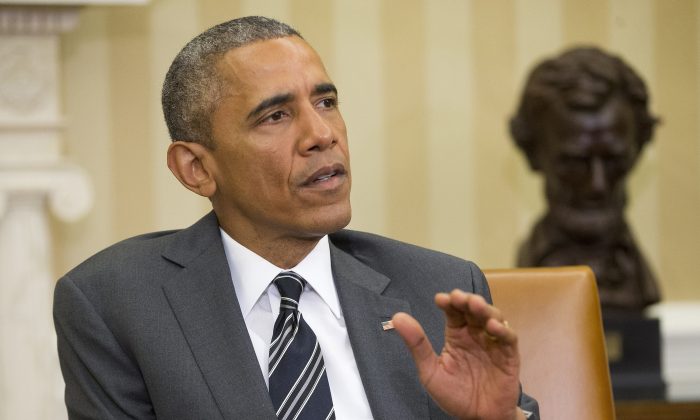 WASHINGTON—After several near-death experiences in the Senate, the trade agenda that President Barack Obama is pushing as a second term capstone faces its biggest hurdle yet in the more polarized House.

The outcome may turn on Republicans’ willingness to hand the president a major win in his final years in office. Underscoring the difficulties, House leaders are looking at the second or third week of June to schedule a vote, even though House members return from recess on Monday.

“The business of bill-passing is a messy, sausage-making process. It was in the Senate, and it certainly will be in the House,” White House communications director Jen Psaki said in an interview. “There will be many moments where there will be difficult issues. We have our eyes wide open with that.”

At issue is legislation that would give Obama parameters for the trade deals he negotiates but also speed up congressional review of the final agreements by giving lawmakers the right to approve or reject deals, but not change them.

Obama is seeking this “fast track” authority to complete a 12-nation Trans-Pacific trade deal that spans the Pacific rim from Chile to Vietnam.

Supporters and opponents of fast track count about 20 House Democrats in favor with fewer than a dozen still on the fence. Proponents of the bill say they need at least 25 Democrats and preferably closer to 30 to counter the 40 to 50 Republicans who are expected to vote against it in the GOP-controlled House.

The fast-track legislation squeezed through the Senate, coupled with a package of federal assistance for workers displaced by free trade agreements that helped secure Democratic votes.

That aid measure, called Trade Adjustment Assistance, has emerged as a particularly tricky component because it’s a priority for Democrats, but many Republicans oppose it and insist on publicly voting against it.

One House leadership option is to “divide the question” on the Senate-passed bill. That would allow separate votes on fast-track and TAA.

Presumably an overwhelming number of Republicans, and just enough Democrats, would vote for fast-track. And TAA would pass with heavy Democratic support and enough help from Republicans. That would ultimately leave the Senate bill intact and clear the way for Obama’s signature.

Some Democrats, however, have raised the possibility of voting heavily against TAA to sabotage their main target, fast track. And many are unhappy that the assistance package would be partly funded by cuts in Medicare’s growth.

“There’s a lot of unease in the Democratic caucus — and explicit opposition — to Congress paying for trade adjustment assistance with Medicare savings,” Bill Samuel, the legislative director for the AFL-CIO, said in an interview. “If Republicans are counting on Democrats to put it over the top, they may not be right about that.”

If the trade assistance measure survives, the fast-track measure would still be in jeopardy.

“There’s overwhelming opposition in the Democratic caucus,” Rep. Rosa DeLauro, D-Conn., a leading opponent of Obama’s trade bill, said in an interview. GOP leaders “are in a bind,” she said. “If they had the votes, they’d be moving.”

DeLauro said “dividing the question” is only one of several options House leaders are considering. “Every option leads to more problems,” she said, “because this is a bad bill.”

At the White House, officials say Obama might rely less on the public speeches and high-profile interviews that characterized the drive toward the Senate vote and focus more on targeted lobbying to retain Democratic supporters and win over any remaining fence sitters.

The White House has been especially impressed by the efforts of House Ways and Means Chairman Paul Ryan, a Wisconsin Republican who has worked to persuade conservatives who are reluctant to give a Democratic president fast-track authority.

Ryan has written opinion pieces with Sen. Ted Cruz of Texas, a darling of the conservative movement, in support of trade and has courted other conservative leaders to back fast track.

On the Democratic side, labor has made opposition to trade a priority, and the AFL-CIO has frozen its political action committee contributions to lawmakers until after the trade votes.

During the Memorial Day congressional recess, a coalition of fast-track opponents aired ads in 17 Democratic congressional districts criticizing the legislation and calling for its defeat.

But those efforts are running up against a more muddled public view of trade. A recent Pew Research Center poll found that 58 percent of those surveyed, including a majority of Democrats, say free trade agreements have been good for the U.S.

Moreover, when Pew asked Americans to list their top priorities for the president and Congress this year, global trade ranked 23rd.

“We do still remain optimistic,” said Kevin Madden, a spokesman for the pro-fast-track Trade Benefits America Coalition, which is running cable television advertisements in favor of the legislation. “We have an opportunity to make the case that this is a decided issue among members’ constituents.”