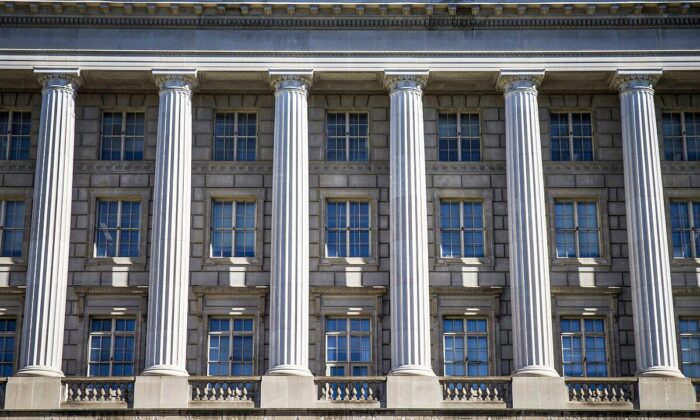 The House of Representatives passed the bill, also along party lines, on Aug. 12 after limited floor debate. Considerable attention, especially by Republicans and independent media, has been focused on a key tax provision that will provide $80 billion to the Internal Revenue Service to fund 87,000 new IRS agents.

Pelosi may have been right about the legislation being “life-changing,” as anyone who has endured an IRS audit can attest. And adding 87,000 new IRS agents will ultimately change a lot of lives of unsuspecting Americans well into the future. But is there more to this than just the scary sound bite? Are there underlying ulterior motives long pursued by the Democrats associated with this expansion of the IRS?

During his presidential campaign, on July 2, 2008, Barack Obama gave a speech in Colorado that touched on his ideas for national service and national security in which he proposed a novel idea: the creation of a “national security force.”

His words: “We cannot continue to rely on our military in order to achieve the national security objectives we’ve set. We’ve got to have a civilian national security force that’s just as powerful, just as strong, just as well-funded.”

Could a well-armed and expanded IRS be what Obama had in mind?

Let us examine the topic.

Obama’s 2008 speech proposing a civilian national security force was swept down the memory hole with the aid of the legacy media, and he was never pressed to explain just what he meant by that proposal. But as is the case with many of the policies pushed by Democrats, they never give up on their cockamamie ideas and work feverishly over time to implement them in federal law, even when thwarted initially by Republicans and the people.

Take Obamacare, for example. Much of the concepts in the original 2,300-page law were formulated during the Clinton administration. Remember Hillary Clinton’s failed “health care task force” and her proposed Health Security Act of 1993 (also known as Hillarycare)? That task force developed a 1,342-page bill, which proposed a universal health care system that ultimately went down to defeat in Congress after a national outcry from concerned citizens.

While Obamacare was modeled after liberal Republican Mitt Romney’s 2006 Massachusetts plan, many of the basic concepts were similar to those initially proposed in Hillarycare: a requirement for all Americans to have health care insurance, cooperatives established to sell health care with federal subsidies for the unemployed and part-time employees, and federal standards established for health care plans.

Nationalized health care was, after all, a lifetime objective of the late Sen. Ted Kennedy (D-Mass.), as his speech in July 2009 detailed his entire life pursuit of “health care for all Americans.” Thus, it was no surprise that Massachusetts would be the incubator for the Democrats’ national health care policy. There’s a continuity of effort over many years—from Kennedy’s long health care advocacy to Bill Clinton and Hillarycare, to Romney (in heavily Democratic Massachusetts), to Obama and Obamacare.

Obama and the IRS

Obama had a penchant for weaponizing federal agencies against his political opponents. For example, his Environmental Protection Agency implemented, without the consent of Congress, onerous regulations on the U.S. coal industry, leading to plant shutdowns. The American Center for Law and Justice reported that “during the shutdown of 2013, the Obama Administration turned our public lands and war memorials into political weapons, denying veterans access to the very monuments built in their honor.”

And then there was the IRS’s targeting of Tea Party groups and the leaking of private information from various conservative groups such as the National Organization for Marriage, as reported by the New York Post. In that same article, Dr. Ben Carson was quoted as saying he was audited by the IRS for the first time ever after he criticized Obama “to his face at the National Prayer Breakfast.” Just a coincidence, or a harbinger of things to come?

Who could forget the uproar over the antics of Lois Lerner, the IRS’s director of exempt organizations, who “flagged a disproportionate number of conservative groups’ tax-exempt status applications” for special processing and was responsible for “substantial … mismanagement, poor judgment and institutional inertia” in handling those applications, as even CNN reported. She was even held in contempt of Congress for not providing requested records or answering questions during a committee hearing.

Yet, an IRS internal investigation let her off the hook in 2015 to the outrage of many conservative groups targeted by the IRS, and of Republicans in Congress. She is now retired and receiving her full pension for her federal service (as well as her service to the Democratic Party!).

The IRS weathered that particular storm, although it was a close-run thing, as Republicans targeted the IRS’s enforcement budget and subsequently reduced the IRS’s overall funding profile over the next eight years, as reported by left-leaning and pro-IRS ProPublica in 2018. Democrats and their media allies have subsequently been “laying some love” on the IRS by complaining about their antiquated computer systems and networks, understaffing, and long delays in processing income tax returns. But even their puff pieces, such as one by The Hill in April, sheepishly report that the IRS is “one of the most-hated federal agencies.” Ya think?

Connecting these and other dots, a 2013 Fiscal Times op-ed opines “how federal workers became Obama’s private army.” The article concludes with this statement: “When law enforcement and tax enforcement become rankly political, Americans can no longer trust in their federal government.” And to think that this was written before the Foreign Intelligence Surveillance Act abuses by Obama’s Department of Justice (DOJ) and FBI associated with the Crossfire Hurricane hoax investigation of former President Donald Trump became known.

Trust in federal government agencies has continued its downward trend over the past few years, as reported in June by Pew Research Center.

The weaponization of the federal bureaucracy against Democrats’ political opponents became standard operating procedure during the Obama years. And President Joe Biden and the Democrats have apparently picked up where Obama left off with respect to the major expansion of the IRS that’s coming, not to mention the DOJ-approved FBI raid on Trump’s home in Mar-a-Lago, Florida, last week.

Conservative and independent media have also recently reported that the IRS has been recruiting armed special agents who qualify as law enforcement officers, as reported in the Washington Examiner. On page 17 of the FY 2021 IRS Criminal Investigation Annual Report, IRS special agents are boldly pictured firing on human-shaped targets at a gun range. And Just the News reported on Aug. 3 that the IRS has already stockpiled over 5 million rounds of ammunition, including $725,000 worth purchased just this year.

While some regard the months-long recruiting of armed IRS agents, range qualifications of special agents on human-shaped targets, and IRS stockpiling over 5 million rounds of ammunition as disconnected from the adding of 87,000 new IRS agents under the Democrats’ Inflation Reduction Act, consider the long-term arc of Democrats’ pursuit of their various policy objectives. All these issues are, in fact, connected regardless of their timing because it’s the end result that counts: the creation of a gigantic “national security force” by any other name. And it appears the IRS will field a large portion of that force. The only issue is the percentage of those new IRS agents who will be armed law enforcement officers.

Under the cover of “fighting inflation,” are the Democrats achieving Obama’s objective of a “civilian national security force”? Is the coming addition of 87,000 new IRS agents, at least some of whom will be armed law enforcement officers, something about which Americans should be worried? Should the fact that the IRS will have more agents than there are U.S. Marines be of concern? Should Americans be concerned that, according to The Washington Free Beacon, the much-reviled IRS is slated to become larger “than the Pentagon, State Department, FBI, and Border Patrol combined”?

FrontpageMag.com has it right: The IRS could very well be a “Gestapo in the making”—which is probably what Obama envisioned in the first place.