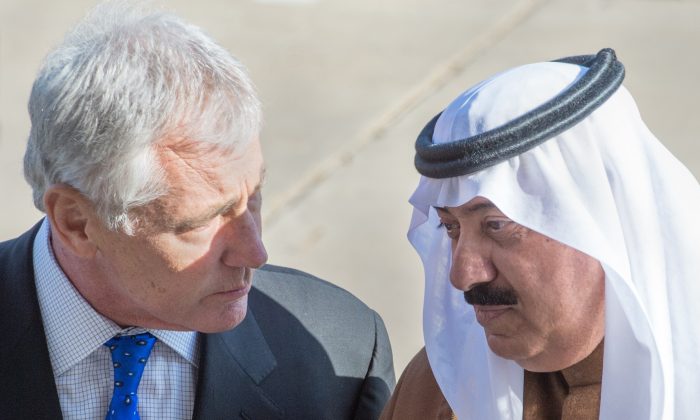 US Secretary of Defense Chuck Hagel (L) greets the Minister of the National Guard of Saudi Arabia, Prince Mitib bin Abdullah bin Abdul Aziz Al Saud(R), as he hosts an honor cordon at the steps of the Pentagon in Washington, DC, on Nov. 21, 2014. (Paul J. Richards/AFP/Getty Images)
Middle East

Obama’s Legacy in the Gulf: Despite Disgruntlement, US Remains Indispensable

To Saudi Arabia and its Arab partners of the Gulf Cooperation Council (GCC), the United States in six years of Barack Obama’s presidency has become as unpredictable and unreliable as it is indispensable. When President Obama passes the baton in 2017, it is likely that he will not be recalled fondly, but this is a distinction shared with most of his predecessors.

The United States has large military centers in Kuwait, Bahrain, Qatar, and the United Arab Emirates, and is set to use a base in Saudi Arabia for the training of Syrian rebels. With the possible exception of Qatar, the GCC states share with Washington a strong interest in confronting Islamic extremism. Only the United States could thwart maritime troublemaking by Iran in the Persian Gulf. The United States is the partner of choice in matters of cyber security. Only the United States could have forged the multinational coalition that has undertaken a joint campaign to break the extremist group in Iraq and Syria that calls itself the Islamic State—a coalition that the GCC monarchies agreed unanimously to support.

But those realities have not overpowered the widespread resentment and suspicion among Gulf Arabs that have soured relations in the past few years. At recent meetings in Washington, in conversations in Saudi Arabia in November, and in commentaries in the regional news media, well-informed officials and respected analysts from the GCC states have rolled out a long list of what they view as failures of American policy and, worse, of American will. Even the glossy magazine in a Riyadh hotel room—the kind that never addresses anything controversial—recently carried an article on “America wiping its hands of its responsibilities in Syria, Iraq, and Afghanistan.” It is published by the Ministry of Foreign Affairs.

Some of these sentiments will dissipate eventually, unless Iraq collapses completely or Iran emerges as the regional superpower. But even if the region settles down and avoids what the Gulf countries would see as the worst outcomes, disenchantment with Washington has led to the development of some new thinking. It is not unusual now to hear GCC voices saying that it is time for these countries to stop waiting for, or depending on, Washington and to assume responsibility for their own security.

“For decades, Arabs have looked to ‘Baba America’ and its allies for protection, knowing full well that U.S. foreign policy is geared solely toward its own security and geopolitical interests,” Khalaf Ahmad al-Habtoor, a prominent businessman in the United Arab Emirates, wrote in the influential Al Arabiya.

Our region would be well-served if Arab governments and peoples spent less time bashing America and more time learning how best to depend on ourselves. We cannot sit back relying on empty pledges from western leaderships currently attempting to enter into some kind of grand bargain with Iran’s ayatollahs…Do we still imagine Uncle Sam will send in the cavalry? If so, we should think again.[1]

“Everybody is in the mood for a post-America Gulf,” Abdelkhaleq Abdulla, a political science professor in Abu Dhabi, said at a recent forum in Washington. He said that the United States now resembles Britain in the early 1970s, when the weakened empire abandoned its longstanding protectorates in the Gulf because it could no longer afford responsibility for them.

Those comments are not outside the regional mainstream. Some are angry at Obama, some are disappointed, some are baffled, but at least for the moment the United States is in disfavor. Whether the criticisms are fair, and whether they are based on fact rather than on emotion, is open to question, but they seem to be pervasive.

Much of this sentiment derives from the crisis in Iraq. The U.S. invasion and the ouster of Saddam Hussein are almost universally seen as mistakes of historic proportions. It was not Obama, of course, who made the decision to invade, but he is now being blamed for many of the regional nightmares that have ensued. Many in the region accuse Obama and his team of withdrawing from Iraq before its armed forces were prepared to defend the country; of standing by while former Iraqi Prime Minister Nuri al-Maliki, in league with Iran, pursued sectarian policies that marginalized all but his fellow Shi’a; and of sticking with Maliki when even his sponsors in Iraq had given up on him, because of an unrealistic commitment to Iraq’s phony democracy. The result was the rise of the Islamic State extremist group, or ISIS, which threatens stability and security from Lebanon to Saudi Arabia.

Khaled Almaeena, editor of the English-language Saudi Gazette, wrote in a recent column that

the Arab world cannot absolve itself of blame for the current impasse, nor can it deny its responsibility for the social ills that contributed to the sectarian divide. However, the United States is also accountable for the present tragedy. The invasion of Iraq and the dismantling of all its institutions created a lethal vacuum and tore apart the fabric of Iraqi society. A poorly formulated American Middle East foreign policy tilting toward the Zionist state has contributed to the rage and bloodshed in the region.[2]

As his comments about Israel—the “Zionist state”—indicate, the list of grievances and perceived U.S. failures hardly ends with Iraq. For Saudi Arabia, the foremost issue is the negotiations over the nuclear program in Iran. It seems to be an article of faith among Saudis, even those not involved with foreign policy, that Iran is a malign force bent on dominating the Middle East, to Saudi Arabia’s detriment. Viewing the negotiations in that light, the Saudis fear that the talks will produce an agreement that leads to a wider rapprochement between Washington and Tehran, lifts economic sanctions on Iran, and thereby strengthens Iran as it pursues what the Saudis see as troublesome interference all across the region.

In addition to Iraq and Iran, the United States is being criticized across a broad spectrum of other issues, including:

Obama’s perceived failure to follow through on what people in the Gulf heard as a commitment to bring down the regime of Syrian President Bashar al-Assad or to deal decisively with the crisis brought on by the civil war there. That conflict has become an endless humanitarian catastrophe that has fragmented Syria, destabilized Iraq, and threatens to destabilize Jordan and Lebanon. Mark Katz, a political science professor at George Mason University, says that at a recent conference on regional security issues in Riyadh, he found “tremendous bitterness” over Obama’s decision to refrain from military strikes against the Syrian regime over its use of chemical weapons. He says the delegates felt that

The Gulf states were not reassured when Gen. Martin Dempsey, chairman of the Joint Chiefs of Staff, told Congress that overcoming ISIS cannot be accomplished militarily but only through “a sustained effort over a long period of time” to strip away its “cloak of religious legitimacy.” He said it was “a generational problem.”[4] The Saudis understand the need to discredit the religious claims of the Islamic State, because they directly challenge their own claims to primacy in Islam, and have been campaigning energetically to spread the message that ISIS is the antithesis of Islam. But they also would like to see more direct military action.

The failure of Secretary of State John Kerry’s effort to forge a peace settlement between Israel and the Palestinians, leaving the Palestinians stranded in the political limbo where they have lived for generations. Related to that are the perceived U.S. passivity toward the massive bombardments unleashed by Israel on Gaza during the recent war there and Washington’s failure to constrain Israel’s plans to expand Israeli housing in Arab East Jerusalem and the West Bank.

Washington’s low-key response to the upheaval in Yemen, where a Shi’i offshoot rebel group known as the Houthis, apparently with Iranian support, surged across the northern regions, took control of the capital, Sana, and forced President Abdu Rabu Mansour Hadi to appoint a new government. The United States welcomed the formation of a new government, but the Saudis and the UAE did not. In their view, keeping Hadi, a Sunni Muslim, in office, while forcing him to do their bidding, was a clever ploy by the Houthis to avoid the appearance of a Shi’i takeover. Gulf officials were not amused by an Iranian official’s recent claim that his country now controls, through proxies, four Arab capitals: Sana, Damascus, Beirut, and Baghdad.

Thomas W. Lippman is an adjunct scholar at the Middle East Institute and author of the book “Saudi Arabia on the Edge.”