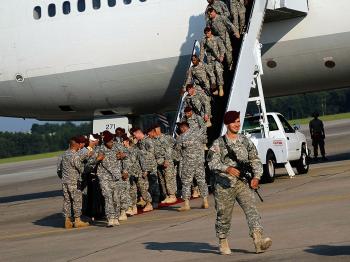 Leaving Iraq: Paratroopers deplane from their year-long tour in Iraq with the U.S. Army's 82nd Airborne Division July 30, 2010 in Fort Bragg, N.C. Over 300 paratroopers in the 1st Brigade of the storied 82nd Airborne returned to their families, who waited (Chris Hondros/Getty Images)
US

Helena Zhu
View profile
Follow
biggersmaller
Print
When U.S. President Barack Obama first took office in early 2009, he promised that the U.S. would end its combat mission in Iraq and reduce its troops to 50,000 by the end of August 2010. He is on schedule to fulfill that promise.

“Let me say this as plainly as I can: by August 31, 2010, our combat mission in Iraq will end,” he said speaking at the Marine Corps Base Camp Lejeune in North Carolina in 2009.

Operation Iraqi Freedom, launched March 2003, will be replaced by Operation New Dawn to mark the new phase in the country’s commitment in Iraq, according to a White House statement. All the U.S. troops are planned to leave Iraq by the end of 2011.

“The reduction in troops does not mean a reduction in the U.S. commitment to Iraq–it means a change in the nature of our commitment from one led by the military to one that is civilian-led,” according to the statement.