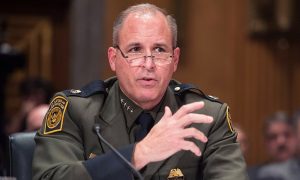 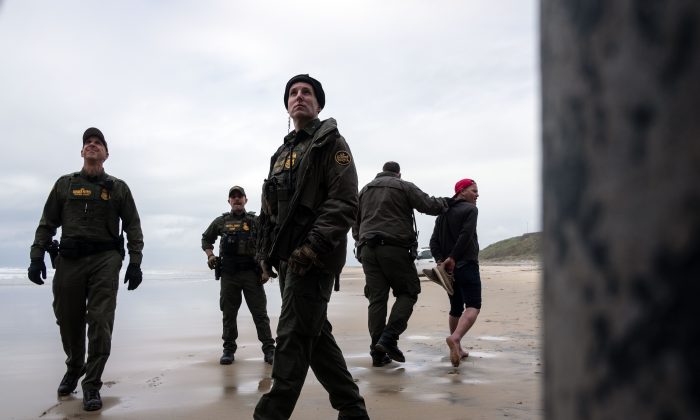 A Central American migrant is taken in custody by Border Patrol after crossing the US-Mexico border fence from Tijuana to San Diego as seen from Playas de Tijuana, in Baja California state, Mexico, on March 21, 2019. (Guillermo Arias/AFP/Getty Images)
Politics

Jeh Johnson, the former homeland security secretary during the Obama administration, said on several recent television appearances that there is a “crisis” at the Southern border, adding that the number of apprehensions has surpassed anything he had seen during his time as the department’s head.

“By anyone’s definition, by any measure, right now we have a crisis at our southern border,” Johnson said during an interview on Fox’s Cavuto LIVE on March 30.

“According to the commissioner of CBP, there were 4,000 apprehensions in one day alone this past week, and we’re on pace for 100,000 apprehensions on our southern border this month. That is by far a greater number than anything I saw on my watch in my three years as Secretary of Homeland Security,” he added.

The Commissioner of U.S. Customs and Border Protection (CBP), Kevin McAleenan, said during a press conference this week that federal agents caught 4,117 people who were either trying to cross the U.S.-Mexico border illegally or through a border crossing on March 26.

“Two weeks ago, I briefed the media and testified to Congress that our immigration system was at the breaking point,” he said. “That breaking point has arrived this week.”

Johnson shared similar remarks in another interview with MSNBC on March 29. He said, “I know that 1,000 [apprehensions] overwhelms the system, I cannot begin to imagine what 4,000 a day looks like. So we are truly in a crisis.”

The former homeland security secretary’s remarks follow President Donald Trump’s comments that he would close the southern border if Mexico does not stop immigrants from reaching the United States.

“There’s a very good likelihood that I’ll be closing the border next week, and that will be just fine with me,” he said on March 29.

The DEMOCRATS have given us the weakest immigration laws anywhere in the World. Mexico has the strongest, & they make more than $100 Billion a year on the U.S. Therefore, CONGRESS MUST CHANGE OUR WEAK IMMIGRATION LAWS NOW, & Mexico must stop illegals from entering the U.S….

….through their country and our Southern Border. Mexico has for many years made a fortune off of the U.S., far greater than Border Costs. If Mexico doesn’t immediately stop ALL illegal immigration coming into the United States throug our Southern Border, I will be CLOSING…..

….the Border, or large sections of the Border, next week. This would be so easy for Mexico to do, but they just take our money and “talk.” Besides, we lose so much money with them, especially when you add in drug trafficking etc.), that the Border closing would be a good thing!

Trump reiterated this in a series of tweets on March 29. He said, “Mexico must stop illegals from entering the U.S through their country and our Southern Border. Mexico has for many years made a fortune off of the U.S., far greater than Border Costs.”

“If Mexico doesn’t immediately stop ALL illegal immigration coming into the United States through our Southern Border, I will be CLOSING the Border, or large sections of the Border, next week,” he added.

ICE and Border Patrol is currently facing major issues with overcrowding at their detention facilities. McAleenan explained that two-thirds of the inflow are children and families from Central America who are “almost guaranteed to be released to remain in the U.S. indefinitely” even though 85–90 percent of them will eventually have their asylum claim denied.

He said this is different from the high numbers in the 1990s and 2000s, as “last time we had crossings near this level, they were almost all adults from Mexico who could be swiftly repatriated.”

In order to relieve overcrowding at many facilities, agents have started releasing illegal immigrants immediately upon apprehending and processing them, McAleenan said.

“For the first time in over a decade CBP is performing direct releases of migrants,” he said. “This is in a limited capacity, it’s very reluctantly, and it represents a negative outcome for enforcement.”

“In February, we saw a 30 percent jump over the previous month, with agents apprehending or encountering nearly 75,000 aliens,” she said. “This is an 80 percent increase over the same time last year. And I can report today that CBP is forecasting the problem will get even worse this spring as the weather warms up.”

She added that the CBP is on track to arrest almost 1 million illegal aliens at the border this year.

Former Border Patrol chief in the Obama administration, Mark Morgan, shared similar views as Johnson, saying that there was an undeniable state of crisis at the border.

“It’s absolutely a national emergency,” Morgan told Fox Business’s “Mornings with Maria” on March 21. “What we are talking about right now is part of the continued catch and release. It’s a little bit different than before.”

He explained that previously anyone caught by border patrol agents would be turned over to ICE, who then releases them according to immigration policies. But now this does not happen because of overcrowding at border patrol and ICE detention facilities.

“Now, border patrol agents are having to release illegal aliens into the interior of the United States. They’re overwhelmed,” Morgan said, adding that after the illegal aliens are released “you never hear from them again.”

Morgan, who was also a former FBI agent, thinks loopholes in asylum laws and the incentives of being in the United States are generally to blame for the level of crisis.

“The intelligence will show you they’re not fleeing violence and persecution like a lot of the talking points,” he said. “Actually violence in Guatemala, [and] all Central American countries, are way down—homicide rates overall.”

He continued, “They’re coming for two reasons economic equality [and] family reunification. And they know because of our asylum laws, they step one foot on American soil, they’re allowed in never to be heard from again.”