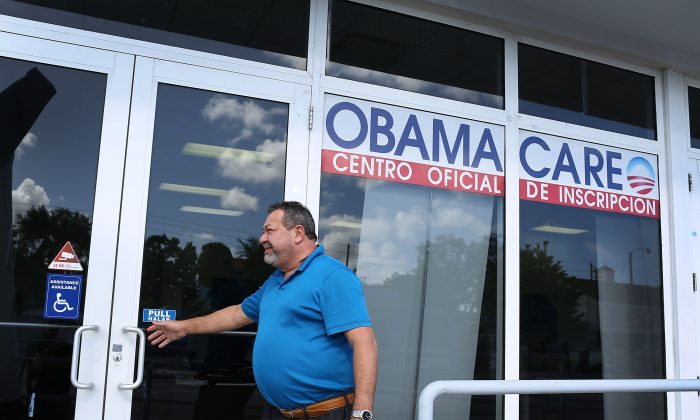 A person walks into the UniVista Insurance company office where people sign up for health care plans under the Affordable Care Act, also known as Obamacare, in Miami on Dec. 15, 2015. (Joe Raedle/Getty Images)
Politics

Obamacare Premiums to Increase by 25 Percent for 2017

Mid-level insurance plans sold through the Affordable Care Act (ACA) will increase by double-digits next year.

Premiums for mid-level plans under the ACA, also known as Obamacare, will increase by 25 percent, three times more than last year’s price hike, according to a report released by the Department of Health and Human Services (HHS) on Oct. 24. Some states might see bigger increases.

The total number of insurers who offer plans on the HealthCare.gov federal marketplace will also decrease this year from 232 to 167.  According to HHS, 20 percent of consumers will only have access to plans from one insurer for 2017 coverage while 56 percent will have a choice of three or more insurers.

The HHS says that the higher insurance costs will be offset in many cases by higher tax credits for consumers.

According to HHS, 72 percent of consumers in states using the HealthCare.gov marketplace will be able to find plans with a premium of less than $75 per month, while 77 percent can find plans below $100 after subsidies.

The ACA, which has insured more than 21 million people since it was passed in 2010, has been a vital topic for presidential candidates Hillary Clinton and Donald Trump. Clinton says she will continue to build on Obamacare, while Trump says he will repeal and replace it.

Other Republicans also criticized the price hike after it was confirmed.

“These drastic premium hikes could affect over 12 million individuals, including Americans who are ineligible for credits and those who purchase coverage outside of the Obamacare exchanges,” said Sen. Orrin Hatch (R-Utah) in a statement.