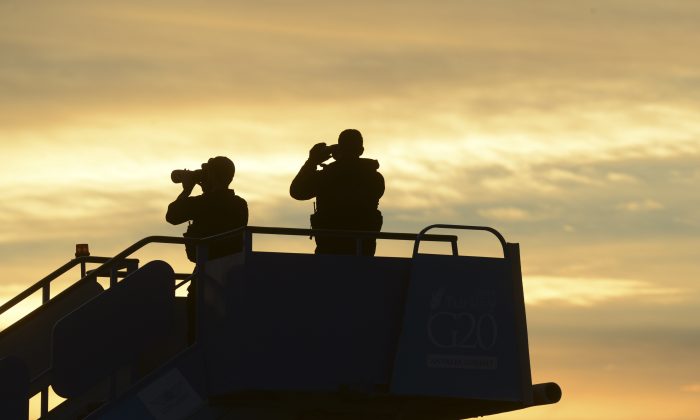 Security officials stand guard as they wait for the plane carrying President Barack Obama to land in Antalya, Turkey, Sunday, Nov. 15, 2015, for the G-20 summit. The 2015 G-20 Leaders Summit is held near the Turkish Mediterranean coastal city of Antalya on Nov. 15-16, 2015. (Ali Atmaca/Anadolu Agency via AP)
International

ANTALYA, Turkey—Jolted to attention by a horrifying terror spree in Paris, world leaders pledged a renewed fight Sunday against the Islamic State (ISIS), but offered little in the way of a revamped counter-terrorism strategy. Instead, President Barack Obama sought to encourage his allies in the fight to intensify the types of efforts that have thus far proven unsuccessful in routing the extremist threat.

Huddling in Turkey, a front-line state in the war against ISIS, leaders from the Group of 20 summit denounced the attacks with towering rhetoric that reflected growing concern that the extremist group is now set on inflicting violence far beyond Iraq and Syria. Obama said that “the skies have been darkened” by the attack that killed at least 129 in Paris, while Turkish President Recep Tayyip Erdogan deemed it a strike “against the whole of humanity.”

“The killing of innocent people, based on a twisted ideology, is an attack not just on France, not just on Turkey, but it’s an attack on the civilized world,” Obama said after meeting with Erdogan as he opened two days of talks in this seaside city just a few hundred miles from the Syrian border.

In addition to the Paris attacks, ISIS is blamed for two deadly bombings in Turkey this year and one in Lebanon. The group has also claimed responsibility for the downing of a Russian airliner this month over Egypt. The White House said it believed ISIS has set its sights on Libya and hinted at more U.S. airstrikes like the one that targeted a top ISIS leader in Libya on Friday—coincidentally, just as the Paris attacks were underway.

The global war against ISIS overtook all other planned topics for the G-20 economic summit, which brings together leading rich and developing nations to discuss heady topics like global economic growth. Instead, leaders vacillated between discussions of how best to defeat ISIS and how to deal with the migrant crisis stemming from Syria’s civil war.

Absent from the talks was French President Francois Hollande. He canceled his trip after the elaborately coordinated assault on a stadium, a concert hall and cafes in the French capital.

Russian President Vladimir Putin, meanwhile, called on nations to pool their efforts to combat terrorism, adding that the fight must respect international law, the U.N. Charter and each nation’s sovereign rights and interests.

“We understand very well that it’s only possible to deal with the terror threat and help millions of people who lost their homes by combining efforts of the entire global community,” Putin said.

On the sidelines of the summit, Obama and Putin held a rare but informal sit-down spanning more than half an hour. The White House said they discussed a new proposal to end Syria’s civil war and Obama’s hope that Russia’s airstrikes in Syria will focus on ISIS, not opposition groups fighting Syrian President Bashar Assad.

On video provided by host country Turkey, the two leaders could be spotted leaning in close to one another and chatting in casual fashion. Broaching another tense topic, Obama renewed his call for Russia to withdraw forces, weapons and support for pro-Russian rebels in Ukraine, the White House said.

In addition to the terror threat, this year’s G-20 agenda also included efforts to hasten global economic growth, with a particular focus on addressing the effects of China’s economic slowdown. In a draft of the final G-20 communique obtained by The Associated Press, leaders renewed their goal to grow their collective GDP by another 2 percent by 2018.

Opening the G-20 meeting, Erdogan said incidents like the Paris massacre have “shown that the relationship between the economy and security cannot be ignored,” and he cited Syria as the clearest example. Likewise, European Union leader Donald Tusk called for a show of “full determination” against terrorism and urged cooperation to prevent terror financing—a step that nations have already been pursuing for more than a year.

In a fresh reminder of the Islamic State’s expanding capacity to wreak havoc, five Turkish police officers were injured Sunday when a suicide bomber blew himself up during a police raid on a suspected ISIS hideout near the Syrian border. Turkish security forces also rounded up 20 suspected ISIS militants in and around Antalya in the run-up to the G-20.

Yet beyond sweeping condemnations of ISIS, leaders have yet to float new, specific proposals for intensifying the fight following the Paris attacks. The U.S. and coalition partners have been bombing ISIS in Iraq and Syria for more than a year with limited success, and Obama has been reluctant to get pulled deeper into the conflict.

Asked whether he would consider additional action against ISIS, Obama wouldn’t tip his hand. But his deputy national security adviser, Ben Rhodes, said Obama was looking to France and others in the U.S.-led coalition to “intensify their efforts.” He said the U.S. considered the Paris attack an “act of war,” but said it was up to France whether to invoke the NATO clause that would require other NATO allies to rush to its defense.

“You’ll see more resources dedicated to strikes, leadership targeting, support for opposition forces,” Rhodes said. He said the U.S. would increase its effort to arm Syrian opposition groups, but ruled out large-scale deployment of U.S. troops to Syria beyond the 50 or so special forces Obama has authorized.