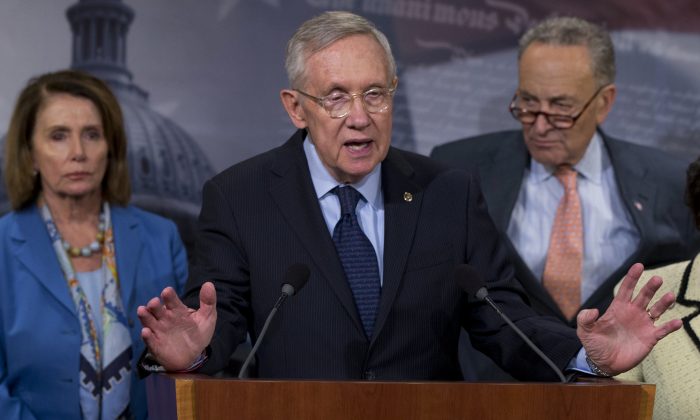 WASHINGTON—President Barack Obama’s $1.9 billion request for emergency money to combat the Zika virus has been sitting before Congress for more than two months, and there’s no obvious path forward despite a growing threat in the hot summer months and increasing public anxiety.

The administration has already transferred almost $600 million of unused Ebola funds and other money to fight Zika in the near term, but it says more is urgently needed to control the mosquitoes that spread the virus, manufacture vaccines once they are developed, and produce more accurate testing for the virus.

The Centers for Disease Control and Prevention said recently that no local mosquito-borne Zika virus disease cases have been reported in the U.S., but there have been 388 travel-associated cases.

The Zika virus can cause microcephaly, a severe birth defect in which babies are born with abnormally small heads. It is spread by mosquitoes and sexual contact and is likely to spread more aggressively as mosquito season looms.

Top Republicans in the House, where tea party lawmakers hold great sway, aren’t convinced that more money is needed now and that it might be fine to wait until the fall.

Not so, says the White House, where press secretary Josh Earnest complained on Wednesday that Republicans “have refused to do what is necessary to protect the country from a genuine public health emergency.”

Questions and answers on where the issue stands:

Q: Why are Republicans controlling the House reluctant to agree to the request?

A: For starters, they contend that the White House has a tendency to pad the numbers on such budget requests. There’s also additional leftover money from $5 billion approved in 2014 to fight Ebola. And if the White House won’t use more of that money there’s a desire to use other previously approved funds to offset the Zika request. Republicans don’t want to add to the budget deficit, and many of them simply won’t agree with any request from the president.

Democrats counter that the threat is real.

“This is not an Obama fantasy,” warns Sen. Barbara Mikulski of Maryland, top Democrat on the Appropriations Committee.

Q: Isn’t there a political cost if they don’t act?

A: You would think so, especially since they would open themselves up to political attacks while they’re away from Washington on a seven-week summer vacation at the same time as the virus might spread during peak mosquito season. Obama also is more popular than Congress and has a much bigger megaphone than his GOP rivals on Capitol Hill.

Q: Why can’t the White House use even more Ebola money to fight Zika?

Q: What about the Senate?

A: Senior Senate Republicans have developed an approximately $1.1 billion proposal to partially fund Obama’s request, and they’ve signaled they want to attach it to an upcoming spending bill — rather than try to advance a stand-alone Zika bill as requested by the White House. Some Senate Democrats, like Mikulski and Patty Murray of Washington state, reacted positively to the overtures. The White House, however, seems to think it can win a bigger package, and more partisan Democratic leaders might be inclined to use the Zika issue to bash Republicans.

A: Both the House and Senate are on recess next week so nothing is happening for a while. When Congress returns the week of May 9, the pressure will be on since the White House has urged action by Memorial Day. If Senate Republicans succeed in bringing up another funding bill and successfully attach Zika funds to it, Democrats are likely to back it. What the GOP-controlled House would do with it is anybody’s guess.