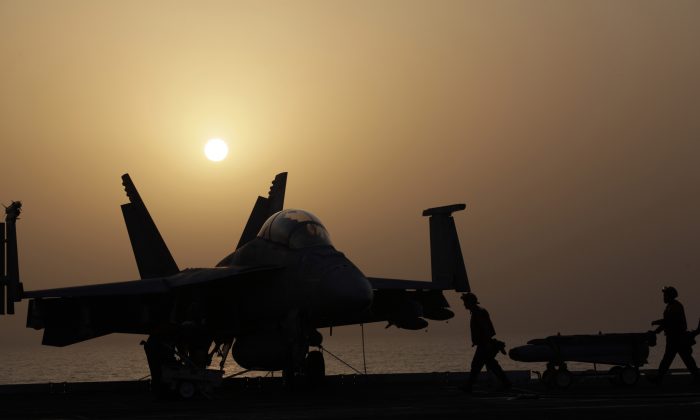 Sailors push missiles on the flight deck of the US Navy aircraft carrier USS George H.W. Bush on Aug. 10, 2014 in the Persian Gulf. Aircraft aboard the George H.W. Bush are flying missions over Iraq after US President Barack Obama authorized airstrikes against Islamic militants and food drops for Iraqis trapped by the fighters. (AP Photo/Hasan Jamali)
Opinion

NEW HAVEN—Even as President Obama has called the well-equipped and well-funded Islamic State group, also known as ISIS or ISIL, a “cancer,” he admitted, “We don’t have a strategy yet.” Part of the challenge lies in the maze of domestic and international law that must be navigated.

So far, Obama has acted lawfully in response to this crisis. Targeted military force in Iraq to rescue the Yazidis and the Turkmen, secure the Mosul Dam, and counter efforts to destabilize the wobbly Iraqi government has been limited, averting humanitarian disaster and protecting US nationals and vital interests. The Iraqi government consented to these strikes for limited purposes, to which closest US allies have lent broad support.

Some US legislators have complained, but Congress remained out of session, with most members eager to avoid a vote on whether to authorize force before the November elections.

But Congress returns on September 8 and, as  the bombing continues into October, will likely accuse Obama of committing US forces to “hostilities” without congressional approval beyond the 60-day time period specified by the War Powers Resolution. Under US law, Obama can hardly extend a conflict with ISIL to Syria based on claims of inherent constitutional authority, after he rightly criticized the Bush administration for pursuing a Global War on Terror based on similar sweeping claims.

Congress long ago enacted two authorizations for the use of military force, or AUMFs, for the region, but:

• The 2001 AUMF authorizes the president to use force on “nations, organizations, or persons” that planned, authorized, committed or aided the terrorist attacks that occurred on September 11, 2001. ISIL did not exist on September 11, and does not appear to be a co-belligerent with Al-Qaeda.

• The 2002 AUMF for Iraq targeted the national security threat there, but was directed at Saddam Hussein and the unfounded fear that he possessed weapons of mass destruction.

Under international law, military strikes in Iraq could be justified in the near term as conducted with local government consent to protect US nationals or prevent genocide against ethnic groups, such as the Kurds, Yazidis or Turkmen.

But inside Syria, where nearly 200,000 Syrian deaths have been recorded since the start of civil war. Assad’s government would not openly consent to US intervention. The goal would be attacking ISIL leadership, not just protecting US nationals or Syrian civilians. At the request of partner governments, the administration could plausibly argue that limited military actions in Syria are necessary in collective self-defense to protect Iraq, Turkey and Jordan from the ISIL threat to regional peace and security. The administration could also justify particular military actions inside Syria as necessary: to save US hostages, like the rescue attempt for journalist James Foley; prevent imminent attack on US citizens; or avert a mass slaughter of innocents. The United States could also take necessary and proportionate actions to target particular senior ISIL leaders who have taken up arms alongside Al-Qaeda against the United States. But absent a UN Security Council resolution, these limited rationales could not sustain long-term concerted military action against ISIL inside Syria.

The first is to do nothing, avoid engaging Congress, and keep bombing based on shifting legal rationales. Such an approach would further weaken the president, triggering an ill-timed constitutional battle over his prerogative to conduct unilateral war-making.

A second option would be to let congressional hawks take the lead and authorize a new AUMF that would effectively perpetuate counterterrorist wars by giving the president broad authority to attack whatever new dangerous groups may arise.  But Congress has never declared a war so open-ended, particularly one the president did not request.

A measured authorization, limited in time and scope, seems far more likely to receive sustained support from Congress, the public and US allies. So the president’s third, best option is to engage Congress proactively to secure tailored legal authority to achieve the various policy objectives he shares with Congress and allies.

In Iraq, the policy goal is to use US airpower, but not boots on the ground, to prevent IS from seizing key assets, harming US citizens or civilian groups, or disrupting the fragile post-Maliki democratic process. In Syria, the strategy should be “to shrink ISIL back to ISIS”  – using military force to contain the would-be caliphate inside Syria, and shrinking it to a non-state actor with activities limited to Syrian territory. US use of military force should not perversely strengthen Assad’s grip on power or improve his capacities to slaughter civilians.

Outside of Iraq and Syria, the US policy goal should be to systematically use aggressive diplomacy and tailored force, consistent with international law, to degrade ISIL capacities to recruit foreign fighters, take hostages, destabilize peaceful governments or conduct brutal campaigns of terror.

To achieve these goals, Obama needs durable legal authority, requiring action on both the domestic and international fronts.

To secure a domestic legal ground for action, the administration should engage with Congress to develop an ISIL-specific AUMF. That statute would authorize the president to use such force against ISIL inside and outside Iraq, to achieve defined strategic objectives, including acting in individual and collective self-defense and degrading ISIL’s capacities to commit terrorist acts and destabilize peaceful governments. Congress should place limits on that delegated authority by, for example, requiring the president to return to Congress for approval should he wish to use force against any armed groups “associated with ISIL” or seek to introduce US ground troops into the territory of Iraq or Syria as part of the conflict. The resolution should include robust consultation and reporting requirements and a “sunset clause” that terminates the authorization at the end of no more than two years, to ensure that Congress assesses progress before assenting to continued use of force against ISIL.

On the international front, the administration should ramp up its diplomatic efforts to enlist support for military operations, particularly from Muslim states. It should seek a UN Security Council resolution defining the particular purposes for which multilateral action is authorized, including sanctions, humanitarian assistance, aid to responsible Syrian rebel groups who oppose both Assad and ISIL, and protection of civilians, refugees, NGO workers and journalists. Of course, Russia will object.  But the coalition should point to Putin’s blatant violation of Ukrainian sovereignty to isolate and shame the Russians from blocking a meaningful resolution. At the same time, diplomats should build support among the Arab League and NATO, with an eye toward breathing life back into the moribund Geneva II Syrian peace process.

The Obama administration is understandably leery about approaching Congress and US allies about authorizing force in Syria after last year’s “redline” debacle – when he could not secure use of force to punish Assad for using chemical weapons on civilians. Some will charge that he has opened a new front against ISIL, when his stated goal was to end wars in Iraq and Afghanistan.  But even if Congress balks, the president should – as a matter of constitutional principle and public accountability – forthrightly demand congressional support for long-term military engagement. The same reasoning favors working with allies to seek a UN Security Council resolution. Without one, the president would need to proceed on shakier international law bases for force against ISIL, such as collective self-defense or a responsibility to avert humanitarian slaughter.

Should the conflicts in Iraq and Afghanistan recede, the president could still seek to narrow or repeal the 2001 and 2002 AUMFs before leaving office.  The president could thus lay a foundation to engage ISIL lawfully, while still seeking to leave office having ended America’s wars.

Harold Hongju Koh, Sterling Professor of International Law at Yale and Legal Adviser to the US State Department from 2009 to 2013 set forth these views in an article originally published in Politico Magazine. Republished with permission from YaleGlobal Online. Copyright © 2014, Yale Center for the Study of Globalization, Yale University.