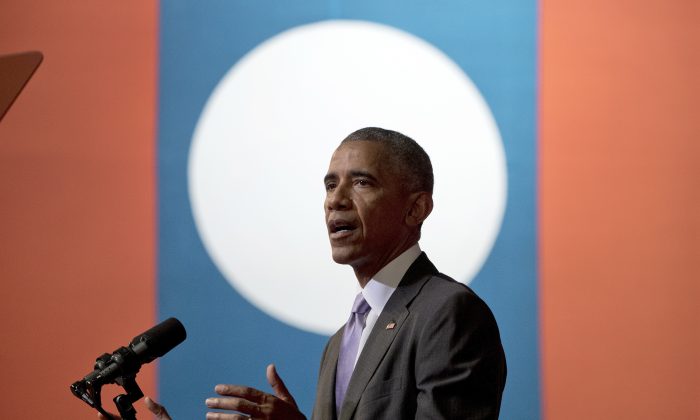 Obama Vows to Work to Tighten Sanctions on North Korea

VIENTIANE, Laos—In the wake of another missile launch, President Barack Obama vowed Tuesday to work with the United Nations to tighten sanctions against North Korea, but added that the U.S. was still open to dialogue if the government changes course.

Obama signaled the U.S. would redouble its effort to choke off North Korea’s access to international currency and technology by tightening loopholes in the current sanctions regime. Obama called the series of ballistic missile launches “provocations” that flouted international law and would only lead to further isolation.

“We are going to work diligently together with the most recent U.N. sanctions,” Obama told reporters after meeting with South Korean President Park Geun-hye. “We’re going to work together to make sure we’re closing loopholes and make them even more effective.”

North Korea fired three ballistic missiles off its east coast Monday, a launch that was widely viewed as a show of force timed to get the attention of world leaders visiting the region for a series of summits. Obama and other heads of state gathered in China over the weekend for the Group of 20 economic summit. Obama went on to the Lao capital for a meeting of the Association of Southeast Asian Nations.

The U.N. Security Council in late August strongly condemned four North Korean ballistic missile launches in July and August. It called them “grave violations” of a ban on all ballistic missile activity. Despite the heavy sanctions, North Korea says the programs are justified because of the threat posed by the U.S. and South Korea.

The White House noted the U.S. remains committed to moving ahead with the planned deployment of a major anti-missile system in South Korea. China has urged South Korea and the U.S. to scrap the U.S. Terminal High Altitude Area Defense, or THAAD, saying it is merely meant to spy on the China.

Park told reporters Tuesday that North Korea missile program is “fundamentally threatening the security” of the Korean Peninsula and both leaders defended its position as defensive.

Obama suggested they would continue to push China, North Korea’s chief ally in the region, to use its influence to intervene and to crackdown on North Korea’s use of front companies and other entities to work around the sanctions. Obama raised the issue in his meeting Saturday, deputy national security adviser Ben Rhodes said.

Even as Obama promised a tougher stance, he did not close off the possibility for dialogue with North Korea, if it were to change course.

“If it is willing to recognize its international obligations and enforce the denuclearization of the Korean Peninsula, the opportunities for us to dialogue with them are there,” Obama said. “We do not have any interest in an offensive approach to North Korea.”