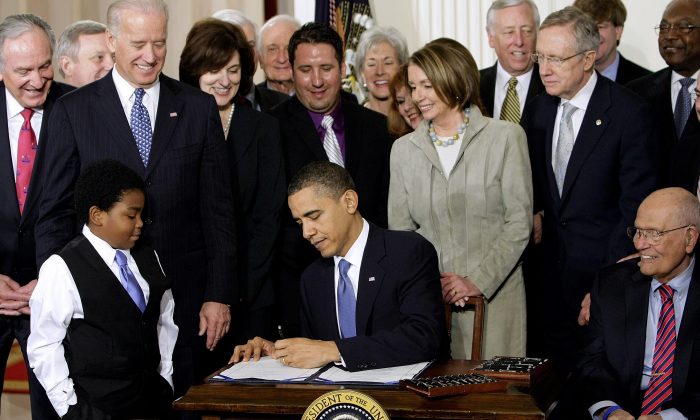 WASHINGTON — Protecting his signature domestic achievement, President Barack Obama on Friday vetoed Republican-inspired legislation to repeal his health care law, saying to do so “would reverse the significant progress we have made in improving health care in America.”

Republican lawmakers have pushed many repeal measures since 2010, when Obama signed the health care program into law. This bill was the first one to make it through Congress and reach his desk.

Republicans have argued that the law is costly and doesn’t work.

In his veto message to Congress, Obama disagreed. Obama said the Affordable Care Act includes fairer rules and stronger consumer protections “that have made health care coverage more affordable, more attainable and more patient-centered. And it is working.”

The veto was expected. But Republicans claimed victory nonetheless, arguing that they met two goals by finally passing a repeal bill: keeping a promise to voters in an election year, and showing that they are capable of repealing the law if a Republican wins November’s presidential election. All the GOP presidential candidates support repealing the law widely referred to as “Obamacare.”

House Speaker Paul Ryan, R-Wis., predicted it will be “a matter of time” before the law is finally overturned.

“We have now shown that there is a clear path to repealing Obamacare without 60 votes in the Senate,” Ryan said. “So, next year, if we’re sending this bill to a Republican president, it will get signed into law. Obamacare will be gone. … It’s just a matter of time.”

The bill would also cut federal funding for Planned Parenthood.

The Senate passed the measure last year under special rules that protected it from a Democratic filibuster, which can be cut off with at least 60 votes. The House passed it this week.

For maximum visibility, Republican leaders made the legislation their first major vote of 2016. Although they don’t have the votes to actually override Obama’s veto, they hope to schedule an override vote to coincide with the Jan. 22 March for Life in Washington, an annual commemoration of the anniversary of the Supreme Court decision that legalized abortion.

“We will hold a vote to override this veto, taking this process all the way to the end under the Constitution,” Ryan said.

The bill would dismantle the health law’s key pillars, including requirements that most people obtain coverage and that larger employers offer it to workers.

It would eliminate the expansion of Medicaid to cover more lower-income people and the government’s subsidies for many who buy policies on newly created insurance marketplaces. It would also end taxes the law imposed to cover its costs.

More than 16 million people have gained health coverage since the law was enacted, according to government figures. They could risk losing it under the GOP approach. Republicans argue the health law has driven up costs and hurt consumers, and they promise “patient-centered” solutions in its place.

Obama said reliable health care coverage would no longer be a right for everyone under the bill, but would become “a privilege for a few.” He admonished lawmakers for wasting time “refighting old political battles” and said they should instead be working on policies to grow the economy, help middle-class families and create jobs.

Ryan hedged earlier this week when asked if the House would ever vote on a GOP replacement for the health care law. Republicans have long promised a substitute, but have never produced one. Ryan has pledged that the House will come up with its own plan this year, but he said it hadn’t been determined whether it would ever reach the floor for a vote.

The bill Obama vetoed also sought to end the roughly $450 million in yearly federal funding for Planned Parenthood, about a third of its budget. A perennial target of conservatives, the group came under intense GOP pressure last year over providing fetal tissue for research.