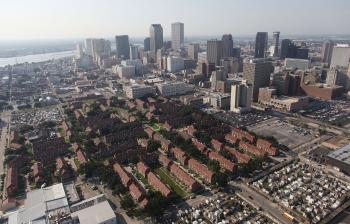 Downtown is seen in an aerial view on Aug. 24 in New Orleans, La. President Barack Obama is set to visit the city on Aug. 29 to mark the fifth anniversary of Hurricane Katrina. (Mario Tama/Getty Images)
US

Obama will be joined by members of the president’s cabinet and other senior administration officials who have worked on recovery of the affected area.

The president plans to deliver remarks at the Xavier University of Louisiana about the administration's efforts to restore the damage caused by both Hurricane Katrina and the recent BP oil spill, as well as the future plans for the region.

"We’ve obviously done a lot to get help down to the Gulf even before this oil spill had had such a terrible impact on the region," said the administration's Deputy Press Secretary Bill Burton. "So he’ll talk a little bit about our efforts, what we’ve done on Katrina, what we’re doing on the Gulf to a certain extent, and what we can do to help the Gulf region recover."

Five years ago, Hurricane Katrina took more than a thousand lives and destroyed 300,000 homes on the Gulf Coast.

Since Obama took office last year, he has taken a number of measures to help the region, including allocating $2.42 billion in public assistance funds for recovery of damaged houses, schools, and business locations in Louisiana and Mississippi. Altogether, Obama, Vice President Joe Biden, and other key federal officials have visited the Gulf Coast over 150 times.