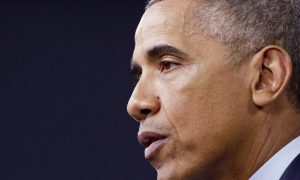 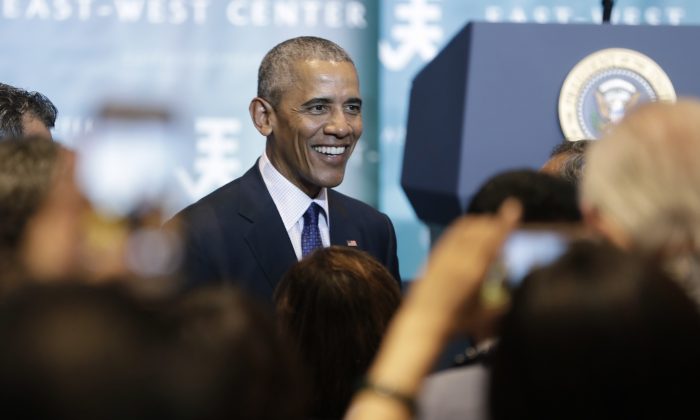 President Barack Obama greets people in the audience after speaking to the 2016 Pacific Islands Conference of Leaders at the East West Center, in Honolulu, Wednesday, Aug. 31, 2016. (AP Photo/Carolyn Kaster)
Politics

Obama on Last Trip to Asia in Conservation Push

HONOLULU—Halfway between East and West, President Barack Obama is traveling Thursday to one of the most remote corners of the ocean—Midway Atoll—to amplify his call for global action on environmental protection.

Few Americans have ever visited the far-flung speck of coral reef, with its black-footed albatrosses and spinner dolphin—and that’s exactly Obama’s point. As he nears the end of his presidency, Obama has sought to use the wonder of natural treasures to instill his pleas for climate action and conservation with a sense of real-life urgency.

In his latest push on conservation, Obama is expanding the Papahanaumokuakea Marine National Monument, which includes Midway, to four times its current size. Speaking to leaders of Pacific island nations ahead of his trip, Obama said that 7,000 species live in the waters, and 1 in 4 are found nowhere else in the world.

“Ancient islanders believed it contained the boundary between this life and the next,” Obama said. “This is a hallowed site, and it deserves to be treated that way. And from now on, it will be preserved for future generations.”

Hopping to Midway on a morning flight from Honolulu, Obama was to land on an airstrip that gained prominence half a century ago, when the Battle of Midway became a turning point in World War II. He planned to spend the afternoon touring the island that sits midway between Asia and North America, getting briefed by conservation officials and interacting with the wildlife, the White House said.

The marine monument, created in 2006 by President George W. Bush, will grow to 582,578 square miles under Obama’s expansion, an area more than twice the size of Texas. The world’s largest, the monument reflects Obama’s strategy of using his executive powers to put lands and waters off-limits to development, despite concerns from critics who argue his heavy-handed approach comes at the expense of vulnerable local economies.

Obama’s decision to expand the monument was the subject of fierce debate within Hawaii, with both sides invoking Native Hawaiian culture to argue why it should or shouldn’t be expanded. Supporters argued the larger monument was needed to protect a place considered sacred by Native Hawaiians by making it off-limits to commercial fishing and recreational activities. But opponents argued the region is heavily dependent on fishing and can’t afford the hit, adding that a federal ban would infringe on the traditions that ancient Hawaiians used to protect natural resources.

The unusual visit to a place where just a few dozen people live comes as Obama uses his final months in office to try to galvanize global action on climate change, which he says is inherently linked to conservation. After Midway, Obama planned to open his final trip to Asia on Saturday with a visit to China, a chance to showcase his unlikely partnership with Chinese President Xi Jinping on global warming.

Obama and Xi have been strident advocates of the sweeping global emissions-cutting deal struck in Paris last year. Officials in both countries were hoping enough progress had been made that both the U.S. and China could announce they’re formally joining that agreement during Obama’s visit.

“When it comes to climate change, there’s a dire possibility of us getting off-course, and we can’t allow that to happen,” Obama said.

One of the world’s most remote coral atolls, Midway derives its name from its location roughly halfway between continents, which made it a strategic place for trans-Atlantic flights to refuel. Though part of the Northwestern Hawaiian Islands, it’s the only one not part of the State of Hawaii, instead grouped with the U.S. Minor Outlying Islands. Claimed by the U.S. in the middle of the 19th century, Midway became a hub of activity in the early 20th century amid efforts to lay a telegraph cable spanning the Pacific Ocean.

The U.S. began pouring military resources into Midway in the early 1940s, building a Naval Air Station equipped with runways, housing and medical facilities. The Japanese attack in 1942 was a pivotal moment in World War II, with the U.S. delivering a resounding defeat that degraded the Japanese Navy’s capacity in the Pacific. In the 1990s, authority shifted from the U.S. Navy to conservation authorities to protect it as a wildlife reserve.

The wealth of biological diversity is nearly unparalleled: millions of birds, hundreds of species of fish and marine invertebrates, green sea turtles and Hawaiian monk seals. More albatrosses live on Midway than anywhere else in the world, and wildlife authorities have worked to prevent a number of endangered species from disappearing from the atoll.