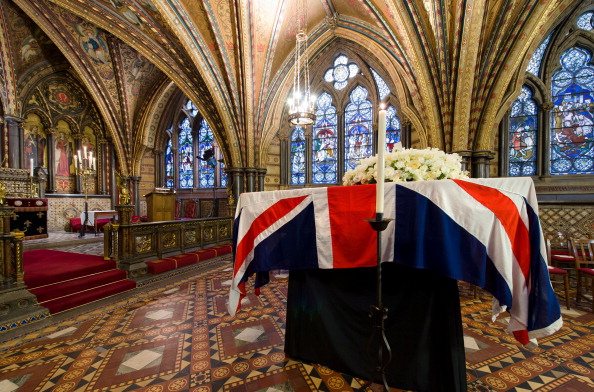 The coffin of former British prime minister Margaret Thatcher rests in the Crypt Chapel of St Mary Undercroft beneath the Houses of Parliament on the eve of her funeral on April 16, 2013 in London, England. (Leon Neal - WPA Pool/Getty Images)
US

Former U.S. ambassador to the U.K., Louis Susman, and Barbara Stephenson, the former State Department Charges D’Affaires, will also go to the funeral.

The funeral for Thatcher, who died earlier this month, is slated for Wednesday.

“We are a little surprised by the White House’s reaction as we were expecting a high-profile attendance,” a source with the U.K. government told the Sun.

“This is a week when there is a lot of movement on Capitol Hill on gun issues,” a White House spokesman told the conservative Breitbart.com website, elaborating on why Obama will not attend the funeral.

Republican Speaker of the House John Boehner will also not attend the funeral.