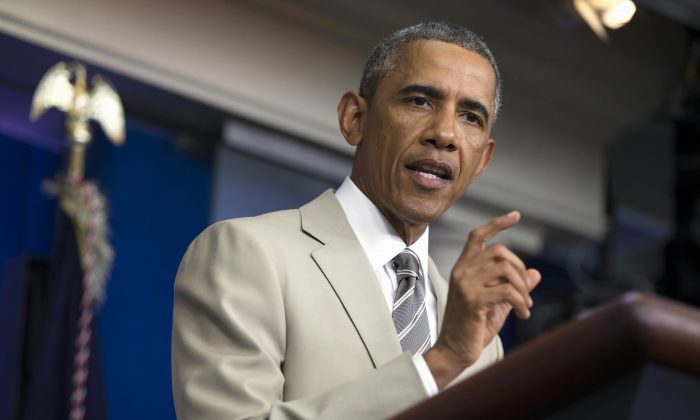 FILE - In this Aug. 28, 2014, file photo, President Barack Obama speaks in the James Brady Press Briefing Room of the White House in Washington, before convening a meeting with his national security team on the militant threat in Syria and Iraq. The diplomatic press is one part of the Obama administration’s push as it tries to make the case for concerted action against the extremist group that has overrun huge tracts of Syria and Iraq, declared the establishment of a proto-state ruled by Islamic law and earned a bloody reputation for brutality and ruthlessness. Obama is to deliver a speech Wednesday, Sept. 10 laying out his plan for defeating the Islamic State group. (AP Photo/Evan Vucci, File)
Life & Tradition

Obama to Resign Over Benghazi, Michelle Obama Interview with OUT Magazine Are Fake; From Satire Site National Report

One reads, “Michelle Obama Claims Upcoming Interview With ‘OUT’ Magazine Will ‘Shock The World'” and the other says, “Obama To Resign January 1st Amid New Benghazi Revelations.”

They’re both published on the National Report, a satire news website.

“The First Lady will be making a candid announcement in next month’s issue of ‘OUT’ magazine; The cover of which Mrs. Obama will also adorn,” one says. And the other one reads: “According to several senior-ranking White House officials, President Barack Obama will resign from office on January 1st 2015, after learning that a so-called “Smoking Gun” story regarding the Benghazi scandal will soon be revealed. Those sources claim Obama will announce his resignation shortly after the midterm elections in November.”

The National Report used to have a disclaimer, which explained that it’s fake and shouldn’t be taken seriously.

Another website saved it: “*DISCLAIMER: National Report is a news and political satire web publication, which may or may not use real names, often in semi-real or mostly fictitious ways. All news articles contained within National Report are fiction, and presumably fake news. Any resemblance to the truth is purely coincidental . The views expressed by writers on this site are theirs alone and are not reflective of the fine journalistic and editorial integrity of National Report.”

Both Obama stories had tens of thousands of shares on Facebook. As indicated by the comments on the article, a fair amount of people apparently believed them.