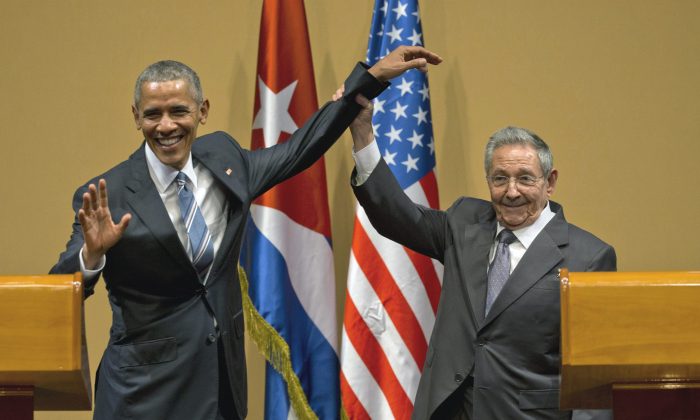 Cuban President Raul Castro, right, lifts up the arm of President Barack Obama at the conclusion of their joint news conference at the Palace of the Revolution, Monday, March 21, 2016, in Havana, Cuba. (AP Photo/Ramon Espinosa)
Politics

Obama to Nudge Cuba on Freedoms in Direct Appeal to Citizens

HAVANA—Trying to nudge Cuba toward Democracy, President Barack Obama will decry political repression and economic deprivation and present a vision of closer ties with the U.S. bringing greater freedom and prosperity when he meets with dissidents and speaks to the Cuban people on Tuesday at the close of a trailblazing trip.

Obama’s rationale for coming to Havana was grounded in the notion that direct interaction with Cubans would do more to empower them and bring about change than decades of isolation ever did. So Obama’s speech at the Grand Theater of Havana offers his best chance to make his case for the U.S. and Cuba putting the vestiges of the Cold War behind them.

His meeting later Tuesday with Cuban dissidents critical of President Raul Castro’s government was a prerequisite for the trip, the White House said, pushing back on suggestions that Obama is rewarding a system whose limits on dissent run counter to American values.

The United States will continue to speak up on behalf of democracy, including the right of the Cuban people to decide their own future.
— President Barack Obama

“The United States will continue to speak up on behalf of democracy, including the right of the Cuban people to decide their own future,” Obama said, standing next to Castro in the Palace of the Revolution. “We’ll speak out on behalf of universal human rights, including freedom of speech and assembly and religion.”

Any question about whether Obama would use his trip to Cuba to ramp up pressure on Cuba’s government ended Monday during an extraordinary joint news conference that the White House negotiated for weeks with Cuban officials to arrange. On live state-run television, Castro faced forceful questioning from American journalists about the slow pace of change in Cuba and detention of political prisoners.

It was a shocking moment in a communist country where few publicly question the authority of Raul Castro or his brother, revolutionary leader Fidel Castro. Though Raul Castro seemed unsettled at times by the free-wheeling exchange, White House aides said it was a powerful reminder that open discourse and strong leadership are not mutually exclusive.

“This is pure history,” said Marlene Pino, a 47-year-old Havana engineer. It’s been nearly a century since the last sitting president to visit Cuba, Calvin Coolidge, arrived on a battleship. Cuban officials made no comments about the interchange but it was left out of extensive state television reports on the day’s events and went virtually unmentioned in state newspapers, in a sign of official discomfort with the scene.

It was unclear exactly which Cuban dissidents would attend Obama’s meeting at the U.S. Embassy, a matter of intense speculation and scrutiny ahead of the president’s trip. Though Cuba has been criticized for briefly detaining demonstrators thousands of times a year, its practice of handing down long prison sentences has diminished dramatically in recent years.

The issue of political prisoners is hugely important to Cuban-Americans and the international community. Yet most people on the island are more concerned about the shortage of goods and their struggles with local bureaucracy.

Though Cuban officials warned Obama firmly against trying to bypass the government and lobby Cubans directly, his speech was expected to be carried live on TV, offering Obama an unfettered chance to lay out his vision for Cuba’s future. Obama’s aides said he’d revisit America’s painful history with Cuba and explain why rapprochement would serve both countries, while working to heal divisions between Cuban citizens and their exiled relatives in the U.S.

Fifteen months ago, Obama and Castro stunned citizens in both countries by announcing plans to normalize relations after a half-century of antipathy. Since then, Obama has moved aggressively to ease U.S restrictions on Cuba, and Castro has moved ahead with broad-based economic and social reforms.

Yet the Obama administration is unsatisfied by the pace of change in Cuba. Castro’s government, for its part, has bristled at the suggestion it must undergo further changes even while the U.S. Congress refuses to lift the detested trade embargo.

Deep differences notwithstanding, Obama’s visit is lending itself to powerful illustrations of what future might be possible for the two countries that sit just 90 miles apart. On Monday, the Star-Spangled Banner rang out in the presidential palace and the two leaders stood together in front of American and Cuban flags, signs of a relationship approaching something like normalcy.

Before departing Cuba on Tuesday afternoon for Argentina, Obama and his family were to attend a baseball game at Havana’s Latin American Stadium, cheering in the stands alongside baseball-crazed Cubans. More than three-dozen U.S. lawmakers along for the trip planned to join them for the game between the Tampa Bay Rays of Major League Baseball’s American League and Cuba’s cherished national team.