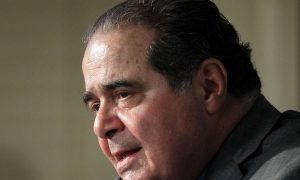 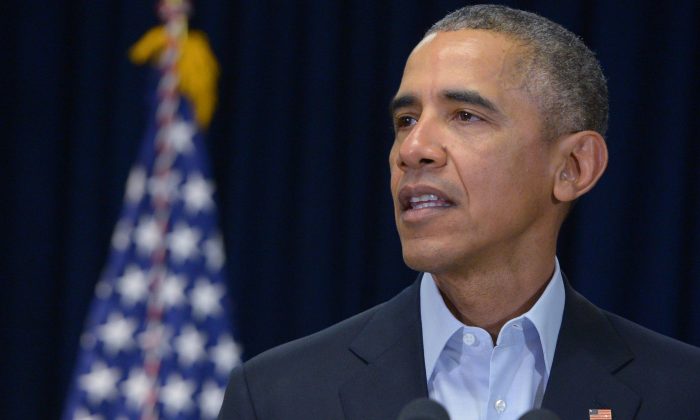 WASHINGTON—President Barack Obama declared Saturday night he would seek to fill the Supreme Court seat left vacant by the death of Justice Antonin Scalia, charging into a heated and likely prolonged election-year fight with Republicans. Obama said a nomination was “bigger than any one party.”

With a half-dozen or more major cases and the ideological tilt of the court in the balance, Obama said he pIanned “to fulfill my constitutional responsibility to nominate a successor in due time.”

The president said the decision was about democracy and “the institution to which Justice Scalia dedicated his professional life, and making sure it continues to function as the beacon of justice that our founders envisioned.”

“The American people should have a voice in the selection of their next Supreme Court justice,” Senate Majority Leader Mitch McConnell said. “Therefore, this vacancy should not be filled until we have a new president.”

The American people should have a voice in the selection of their next Supreme Court justice. Therefore, this vacancy should not be filled until we have a new president.
— Mitch McConnell, Senate majority leader

Democratic candidate Hillary Clinton told a Democratic dinner in Denver that Obama “is president of the United States until Jan 20, 2017. That is a fact my friends, whether the Republicans like it or not.”

“Let’s get on with it,” said Democrat Bernie Sanders, arguing that the Senate should vote on whoever Obama nominates.

The court has already heard—but not decided—big cases involving immigration, abortion, affirmative action and public employee unions. With many cases recently decided by 5-4 margins, with Scalia leading the conservative majority, the vacancy could have major repercussions, both legally and in the presidential race.

The nomination fight in the Senate could determine the tenor of much of Obama’s final year in office—and ricochet through the campaign to replace him. Obama, who already has little goodwill on the Hill, faces stiff opposition from Republicans hungry for the chance to further tip the court to the right. A confirmation process often takes more than two months, but could be drawn out longer by the Republican-led Senate.

Obama said the Senate should have enough time for a fair hearing and timely vote.

Senate Democrats made clear that they would work vigorously to keep Republicans from trying to run out the clock. They quickly offered counterarguments to Republican statements that the decision should rest with the next president.

It would be unprecedented in recent history for the Supreme Court to go a year with a vacant seat.
— Harry Reid, Senate minority leader

“It would be unprecedented in recent history for the Supreme Court to go a year with a vacant seat,” said Senate Minority Leader Harry Reid of Nevada. “Failing to fill this vacancy would be a shameful abdication of one of the Senate’s most essential constitutional responsibilities.”

Democrats pointed out that Justice Anthony Kennedy was confirmed in an election year—1988—the final year of Ronald Reagan’s presidency. Kennedy had been nominated in November 1987 after the Senate rejected Robert Bork and Douglas Ginsburg bowed out.

Democrats also argued that waiting for the next president in January 2017 would leave the court without a ninth justice for more than the remainder of Obama’s term as Senate confirmation would not be immediate.

The court faces a crowded docket of politically charged cases that are certain to resonate in the presidential campaign on issues such as immigration, abortion, affirmative action, climate change, labor unions and Obama’s health care law. Decisions were expected in late spring and early summer on whether the president could shield up to 5 million immigrants living in the United States illegally from deportation.

The immediate impact of Scalia death means that the justices will now be divided 4-4 in many of those cases. If there is a tie vote, then the lower court opinion remains in place.

A Senate looking at a limited legislative agenda in an election year now faces one of the most consequential decisions for the venerable body. Not only will voters choose the next president, majority control of the Senate is at stake in November, with Republicans clinging to control and concerned about the fate of some half dozen GOP senators running for re-election in states that Obama won.

Srinivasan was confirmed by the Senate 97-0 in 2013. He has served under Democratic and Republican administrations and was a law clerk to former Supreme Court Justice Sandra Day O’Connor.

Millet has argued dozens cases before the Supreme Court.

Another potential nominee is Paul J. Watford, a judge on the U.S. Court of Appeals for the Ninth Circuit. Watford, an African-American, served as a law clerk to Justice Ruth Bader Ginsburg from 1995 to 1996.

Not all the Republicans said Obama should skip a nomination fight.

Former Florida Gov. Jeb Bush, who is positioning himself as a moderate, said Obama has the power to nominate and should use it.

Ohio Gov. John Kasich lamented, “I just wish we hadn’t run so fast at the politics.”