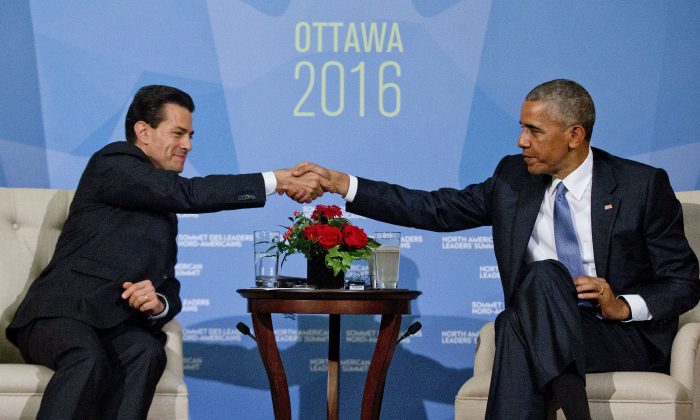 FILE - In this Wednesday, June 29, 2016 file photo, President Barack Obama shakes hands with Mexican President Enrique Pena Neito during their bilateral meeting at the National Gallery of Canada in Ottawa, Canada. Hours after Donald Trump accepted the Republican presidential nomination, Obama is opening the White House to Mexican President Pena Nieto, who has said the GOP candidate's negative attitude toward Mexicans, including saying they bring drugs and crime to America and calling them rapists, has hurt his country's relations with the U.S. The Republican National Convention ended Thursday night, July 21, 2016, in Cleveland with Trump's acceptance speech. (AP Photo/Pablo Martinez Monsivais, File)
Politics

WASHINGTON—Hours after Donald Trump accepted the Republican presidential nomination, President Barack Obama is opening the White House to Mexican President Enrique Pena Nieto, who has said the GOP candidate’s negative attitude toward Mexicans, including saying they bring drugs and crime to America and calling them rapists, has hurt his country’s relations with the U.S.

Pena Nieto’s visit comes less than a month after he and Obama met in Canada during a summit of North America’s leaders. Obama’s meetings with visiting foreign leaders are usually announced weeks in advance, but Pena Nieto’s visit was announced just last week.

The White House shrugged off suggestions that the visit was timed to highlight differences between Democrats and Republicans, particularly on attitudes toward Latinos. The Republican National Convention ended Thursday night in Cleveland with Trump’s acceptance speech.

“I think it’s fair to say that almost anything that President Obama did on Friday would be viewed as a sharp contrast to the agenda that’s being put forward by the other side,” said White House press secretary Josh Earnest. “But in this case, it’s been a while since the president has hosted the president of Mexico here at the White House.”

Pena Nieto’s only other White House visit came in January 2015.

In announcing his presidential campaign last summer, Trump pledged to build a border wall between the U.S. and Mexico and make Mexico pay for it. He also said Mexican immigrants “have lots of problems” and when they come to the U.S. “they’re bringing drugs. They’re bringing crime. They’re rapists. And some, I assume, are good people.”

Pena Nieto has said his government will work with whoever succeeds Obama in January. Former Obama Secretary of State Hillary Clinton is expected to become the Democratic nominee for president when her party convenes next week in Philadelphia.

But Pena Nieto has also criticized Trump’s tone, telling a Mexico City-based newspaper earlier this year that Trump speaks the type of language that gave rise to dictators Adolf Hitler and Benito Mussolini. Mexico’s leader has also said Trump’s stance is hurting his country’s relations with the U.S., and that Mexico will not pay for a border wall.

Nor has Obama hidden his disdain for Trump and his politics.

Last month, Obama blasted Trump’s “loose talk and sloppiness,” arguing that the candidate’s call to temporarily ban Muslims from coming to the U.S. could lead to discrimination against ethnic and religious minorities. He said Trump was a “dangerous” threat to the nation’s safety, religious freedom and diversity.

Pena Nieto tweeted Thursday after arriving in Washington that he was happy to be in the U.S. capital to continue productive talks with Obama about the U.S.-Mexico agenda. After meeting with Obama in the Oval Office on Friday morning, the leaders will move to the elegant East Room for a joint news conference where they likely will be questioned about Trump.

Earnest said the pending Trans-Pacific Partnership trade agreement that both countries have signed on to, economic issues, border security, drug trafficking and climate change are among the topics that Obama and Pena Nieto are likely to discuss. “There’s plenty on the agenda that doesn’t involve the Republican nominee,” Earnest said.