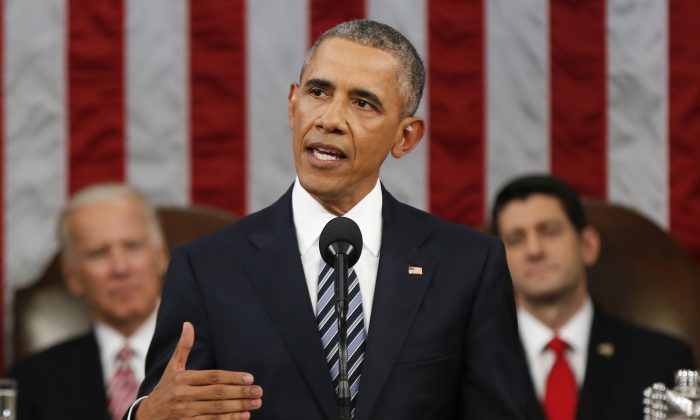 President Barack Obama delivers his State of the Union address before a joint session of Congress on Capitol Hill in Washington, D.C., on Jan. 12, 2016. (Evan Vucci/Getty Images)
Politics

BATON ROUGE, La.—Louisiana’s new governor, Democrat John Bel Edwards, is getting a public “thank you” from President Barack Obama for rejecting the stance of his Republican predecessor and starting the process to expand the state’s Medicaid program.

That’s an important end-of-term policy priority for Obama, who was appearing in Baton Rouge on Thursday as part of a post-State of the Union trip.

Obama’s health care law, enacted in 2010, allows states to use federal money to expand Medicaid and provide health coverage to more of the working poor. The federal government pays the full cost of expansion through 2016, gradually dropping to 90 percent in 2020 and after.

Thirty other states and the District of Columbia have accepted Washington’s offer. But more than a dozen mostly conservative states have not.

In an attempt to persuade holdout states to adopt the Medicaid expansion, Obama will ask Congress to provide full federal funding for the first three years after states expand their programs. A state that expands Medicaid this year — currently the final year for full federal funding — or any year after would get Washington to pay 100 percent of the costs for the first three years.

The White House announced the proposal early Thursday, before Obama’s town hall at a high school. Officials said the proposal will be included in the 2017 federal budget that Obama is scheduled to send to Capitol Hill next month.

But the plan seems unlikely to gain the backing of the Republican-led Congress, which has voted numerous times to repeal the health law. Last week, the president vetoed the first repeal bill to make it to his desk.

Obama said Wednesday the law is intended to ensure people have basic security if they lose a job or change jobs.

“That’s what it’s all about,” he told an audience in Nebraska, his first stop after his final State of the Union address. Nebraska lawmakers are expected to try again this year to pass a Medicaid expansion bill.

In Louisiana, Edwards signed an executive order Tuesday calling for the state Department of Health and Hospitals to make the changes necessary to begin doing “the right thing” by offering health insurance coverage to the working poor.

“This is not even a close call,” Edwards said.

Former Gov. Republican Bobby Jindal, who left office this week after dropping out of the presidential race, refused to expand the program. Jindal argued that it was too costly for the state and was an inappropriate growth of government spending.

Edwards said he wants the expansion to take effect by July 1. It wasn’t immediately clear whether the state’s majority-Republican Legislature would try to block it.

His administration estimates that 300,000 more people, mainly the working poor, would be added to Louisiana’s Medicaid rolls under the expansion. It covers adults making up to 138 percent of the federal poverty level, about $33,400 for a family of four.

After a town hall meeting in a largely African-American neighborhood, Obama planned to field additional questions on Twitter during his Louisiana visit before returning to Washington late Thursday afternoon.

The White House says Obama wants to spend more time this year outside of Washington and in the company of real people.