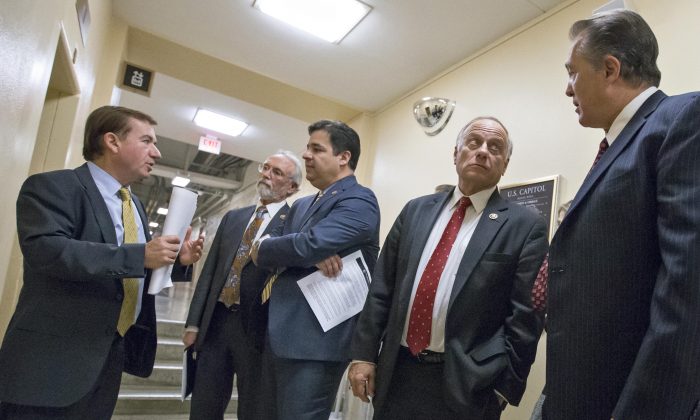 WASHINGTON—The White House on Wednesday threatened a presidential veto of House Republican legislation aimed at increasing screenings for Syrian and Iraqi refugees before they enter the United States, calling new requirements in the bill “untenable.”

The legislation, which sets high hurdles for refugee admissions, including FBI background checks and individual sign-offs by top federal officials, “would provide no meaningful additional security for the American people, instead serving only to create significant delays and obstacles in the fulfillment of a vital program that satisfies both humanitarian and national security objectives,” the White House said.

President Barack Obama would veto the legislation if it reaches his desk, the statement concluded.

Republican leaders, eager to respond quickly to Friday’s terror attacks in Paris, had described the bill as a middle-ground approach. It institutes tough new screening requirements, but steers clear of demands from some Republicans, including presidential candidates, for religious questioning or a complete end to the U.S. refugee program.

“This is common sense. And it’s our obligation,” Speaker Paul Ryan of Wisconsin said on the House floor ahead of the veto threat. “If the intelligence and law-enforcement community cannot certify that a person presents no threat, then they should not be allowed in.”

In the Senate, lawmakers emerging from a closed-door briefing with administration officials Wednesday night said Democratic Sen. Dianne Feinstein and Republican Sen. Jeff Flake planned to introduce a bill that would restrict visas for any individual who had been in Iraq or Syria in the past five years.

Sen. Dick Durbin (D-Ill.) said Republicans are focused on a refugee program that is “serious and arduous,” but 20 million foreign visitors come to the U.S. with visa waivers with no fingerprinting or background vetting.

“Now that has to be reformed,” he said.

Only around 2,200 Syrian refugees have been allowed into this country in the last four years and they already go through a comprehensive vetting process that can take as much as three years, including biometric screening, fingerprinting and additional classified controls. The new bill would add a requirement for the Homeland Security secretary, along with the head of the FBI and the Director of National Intelligence, to certify that each refugee being admitted poses no security threat.

The FBI also would be tasked with coming up with a way to conduct a “thorough background investigation” of refugees fleeing chaos and horror. Although Syrians tend to be heavily documented, Democrats questioned how that could be accomplished. The current refugee program, along with Obama’s plan to add 10,000 more Syrian refugees this year, would likely come to a stop while the new protocol is established.

Republicans had hoped that Democrats, facing pressures from nervous constituents, would support the bill in large numbers. Yet even before Obama announced his position, Democratic leaders were turning against the legislation, complaining of changes to the bill they said would have the practical effect of keeping refugees out of the U.S. entirely.

“Some in Congress intend to use this tragedy to shut down the U.S. refugee program, turning our backs on victims,” Democratic Reps. Adam Schiff and Zoe Lofgren of California and Bennie Thompson of Mississippi said in a joint statement.

Obama, traveling overseas, had earlier ridiculed Congress for jumping on the refugee issue after failing to come up with legislation authorizing the use of military force in Syria, which he has been seeking for months.

“And now, suddenly, they’re able to rush in, in a day or two, to solve the threat of widows and orphans and others who are fleeing a war-torn land, and that’s their most constructive contribution to the effort against (the Islamic State)?” Obama said in the Philippines. “That doesn’t sound right to me. And I suspect it won’t sound right to the American people.”

The conservative group Heritage Action for America also announced its opposition to the bill, saying it gives too much authority to appointees of Obama. Nonetheless, many of the House conservatives who’ve caused problems for GOP leadership on legislation of all kinds said they would support it.

Senate action, though, is not likely until after Congress’ Thanksgiving recess. And with little chance for the bill to become law, several conservatives said the real action could come on a pending must-pass year spending bill that has to clear by Dec. 11 in order to keep the government running. Some want to use that bill to cut off funding for the refugee program—foreshadowing another potential government shutdown fight.