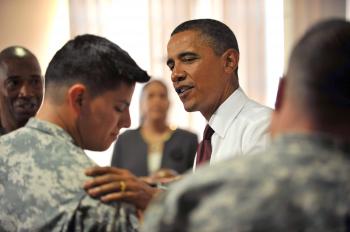 Obama Thanks Troops for Their Sacrifices

Helena Zhu
View profile
Follow
biggersmaller
Print
As the nation officially ends its combat mission in Iraq, President Obama thanked troops in Texas on Tuesday for their sacrifices in Iraq.

“I wanted to come down to Fort Bliss mainly to say thank you and to say welcome home,” said Obama, addressing about 170 troops at Fort Bliss Army Base in El Paso.

“There are times where, in our country, we’ve got political disagreements.  And appropriately we have big debates about war and peace.  But the one thing we don’t argue about is the fact that we’ve got the finest fighting force in the history of the world.

“Because of the extraordinary service that all of you have done, and so many people here at Fort Bliss have done, Iraq has an opportunity to create a better future for itself, and America is more secure.”

Since the launch of Operation Iraqi Freedom in March 2003, a million men and women in uniform have served in Iraq. From Fort Bliss, 51 soldiers have lost their lives.

Although the combat mission has ended, some troops will continue to present in Iraq. They will support and train the Iraqi forces, assist them with counterterrorism missions, and protect American civilian and military efforts. At the operation’s peak, about 160,000 troops were deployed to Iraq.

“I just want to say thank you on behalf of the country, because without you we couldn’t enjoy the freedoms and the security that are so precious,” said Obama. “And all of you represent that long line of heroes that have served us so well generation after generation."

After speaking to the troops and shaking hands with them, Obama left for the White House to prepare for his Tuesday night speech. He will address the nation at 8 p.m. EDT from the Oval Office.

Leading up to the new phase, Vice President Joe Biden met with Iraqi officials on Monday to discuss the most recent developments in the country and to urge them to wrap up negotiations on the formation of a new government.