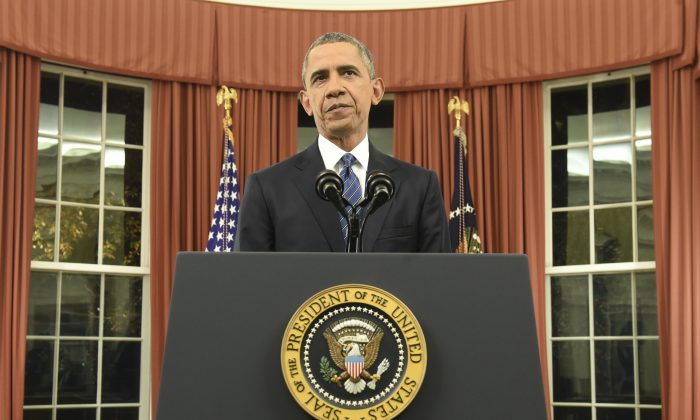 President Barack Obama addresses the country from the Oval Office in Washington, D.C., on Dec. 6, 2015. (Saul Loeb/Getty Images)
US

WASHINGTON—In a rare Oval Office address, President Barack Obama vowed Sunday night that the United States would overcome a new terror threat that seeks to “poison the minds” of people here and around the world, as he sought to reassure Americans shaken by recent attacks in Paris and California.

“I know that after so much war, many Americans are asking whether we are confronted by a cancer that has no immediate cure,” he said, speaking from a lectern in his West Wing office. “The threat from terrorism is real, but we will overcome it,” he declared.

The president’s speech followed the Dec. 2 shooting in San Bernardino, California, that killed 14 people and wounded 21. Authorities say a couple carried out the attack and the wife pledged allegiance to the Islamic State (ISIS) and its leader in a Facebook post.

Obama said that while there was no evidence that the shooters were directed by a terror network overseas or part of a broader plot, “the two of them had gone down the dark path of radicalization.”

“This was an act of terrorism designed to kill innocent people,” he said in the 13-minute address.

Obama’s speech was likely to leave his critics unsatisfied. He announced no significant shift in strategy and offered no new policy prescriptions for defeating ISIS, underscoring both his confidence in his current approach and the lack of easy options for countering the extremist group.

He did call for a review of the visa waiver program for people seeking to come to the United States and said he would urge private companies and law enforcement leaders to work together to ensure potential attackers can’t use technology to evade detection.

He also called on Congress to pass new authorization for military actions underway against ISIS in Iraq and Syria and to approve legislation to keep people on the “no-fly list” from buying guns.

“Even in this political season, even as we properly debate what steps I and future Presidents must take to keep our country safe, let’s make sure we never forget what makes us exceptional. Let’s not forget that freedom is more powerful than fear; that we have always met challenges—whether war or depression; natural disasters or terrorist attacks—by coming together around our common ideals as one nation and one people. So long as we stay true to that tradition, I have no doubt that America will prevail.” —President Obama: go.wh.gov/ISIL

The president also reiterated his call for tightening gun laws, saying no matter how effective law enforcement and intelligence are, they can’t identify every would-be shooter. He called it a matter of national security to prevent potential killers from getting guns.

“What we can do, and must do, is make it harder for them to kill,” he said.

While Obama has spoken frequently about ISIS in recent news conferences and other events, the decision to speak in prime-time reflected concern among his advisers that his message isn’t breaking through. The White House has been particularly concerned about the heated rhetoric from Republican presidential candidates about Muslims.

The president implored Americans to not turn against Muslims at home, saying ISIS was driven by a desire to spark a war between the West and Islam. Still, he called on Muslims in the United States and around the world to take up the cause of fighting extremism.

The spread of radical Islam into American communities, he said, is “a real problem that Muslims must confront without excuse.”

He repeated his long-standing opposition to an American-led ground war in the Middle East and made no mention of the more aggressive action others have suggested, including enforcing a no-fly zone and safe corridors in Syria.

The president’s critics—and increasingly, some members of his own party—have questioned his strategy. Hours before he spoke, Hillary Clinton—his former secretary of state and the front-runner for the Democratic presidential nomination—said the United States is “not winning” the fight against ISIS.

Obama has insisted that ISIS is contained in Iraq and Syria. However, the group has set its sights elsewhere in the world, launching attacks in Lebanon and Turkey and downing a Russia airliner over Egypt.

The Nov. 13 attacks in Paris marked the group’s most aggressive actions in Europe, a coordinated effort that left 130 people dead and wounded hundreds more.

Last week, the terror threat drew even closer for Americans when a couple—a 29-year-old woman originally from Pakistan and her 28-year-old American-born husband—launched an attack on a holiday luncheon in San Bernardino.

The woman pledged allegiance to ISIS and its leader in a Facebook post, according to a U.S. official who was not authorized to discuss the case publicly and spoke on condition of anonymity. A Facebook official said the post came about the time the couple stormed the San Bernardino social services center.

Authorities say they believe the guns used by the attackers were legally obtained.

The FBI is investigating the massacre as a terrorist attack that would be the deadliest by Islamic extremists on American soil since Sept. 11, 2001.