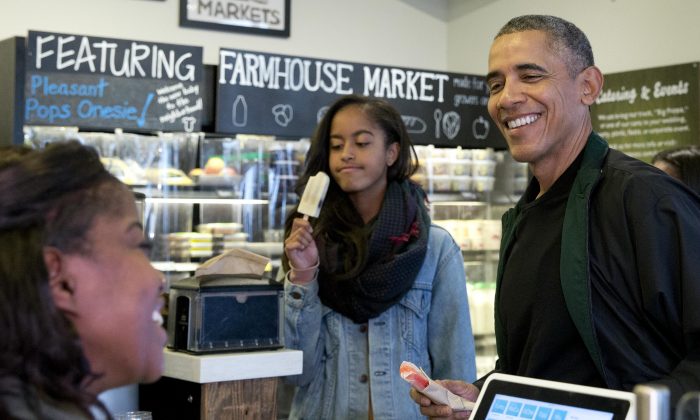 President Barack Obama, joined by his daughters Malia (L) and Sasha, in the background at right, orders a treat at Pleasant Pops on Small Business Saturday in Washington, Saturday, Nov. 28, 2015. (AP Photo/Carolyn Kaster)
US

The Obamas skimmed through books in the fiction section of the dimly lit store with bright green walls. Miniature Christmas lights were hanging on the ceiling and around the front window display.

The president emerged from the store with a brown shopping bag full of his purchases, which the White House said included children and young adult novels such as “Diary of a Wimpy Kid: Hard Luck, Book 8,” ”Dork Diaries 1: Tales from a Not-So-Fabulous Life,” ”A Snicker of Magic,” ”On Fortune’s Wheel,” and “Purity: A Novel.”

The family moved on to the Adams Morgan neighborhood for frozen treats at Pleasant Pops, a cafe and market known for fresh fruit frozen pop. Obama ordered a strawberry ginger lemonade one, Malia nibbled on cookies and cream and Sasha had cranberry apple.

When the cashier told Obama his order came to $9, the president replied, “What a bargain.” He added, “This is the highlight of the girls’ Small Business Saturday.”

Obama has shopped at other Washington bookstores including Kramerbooks and Politics and Prose as part of what retailers promote as Small Business Saturday.

The Saturday after Thanksgiving is designed to drive business to mom and pop shops between the Black Friday sales and Cyber Monday deals.