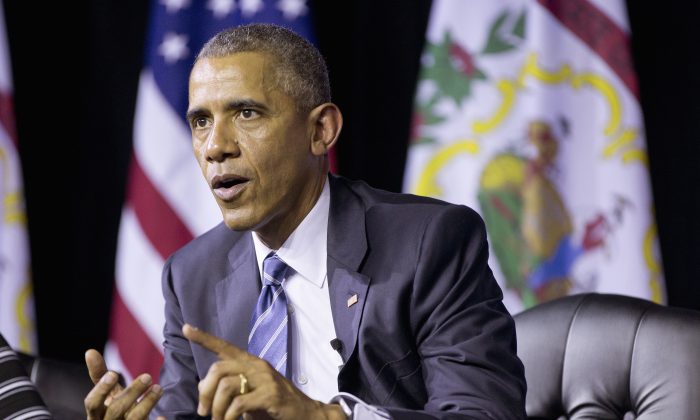 President Barack Obama answers questions from members of the audience during a community forum at the East End Family Resource Center in Charleston, W.Va., on Wednesday, Oct. 21, 2015. Obama is in Charleston to lead a community discussion on prescription drug abuse and heroin epidemic. (AP Photo/Pablo Martinez Monsivais)
US

CHARLESTON, W.Va.—Traveling to a region in the throes of a drug abuse crisis, President Barack Obama promised Wednesday to use his bully pulpit and federal programs to try to combat the “epidemic” of heroin use and prescription painkiller abuse that is upending communities across the country.

“This crisis is taking lives; it’s destroying families and shattering communities all across the country,” Obama said at a panel discussion on opioid drug abuse. “That’s the thing about substance abuse; it doesn’t discriminate. It touches everybody.”

On stage at a crowded community center, Obama heard from advocates, health care workers, law enforcement officials and policy makers about the depth of a problem that has long simmered at the state level but just recently risen to the national political stage.

Charleston Police Chief Brent Webster said his officers deal with a “community of zombies walking around” in need of treatment. A father of five daughters described what it was like to find one of them had overdosed, a needle hanging from her arm.

Obama said the stories reminded him of his teenage daughters and his own rebellious teen years.

“I did some … stuff,” he noted, referencing his drug use as a teenager. “And there but for the grace of God.”

West Virginia has the highest rate of overdose deaths in the U.S.—more than twice the national average, according to a report by the Trust for America’s Health and the Robert Wood Johnson Foundation.

State officials say the problem is damaging the economy, depressing the workforce and overwhelming social services.

Obama’s trip was briefly delayed by Vice President Joe Biden’s announcement from the White House Rose Garden that he would not to seek the presidency. The news threatened to overshadow Obama’s attempt to throw a national spotlight on the drug issue, but his visit was closely watched in West Virginia, a state where his energy policies have made him deeply unpopular.

Obama stressed that the drug abuse problem is a national one.

A Centers for Disease Control and Prevention report released in July found the number of people who reported using heroin within the past year had nearly doubled from 2002 to 2013. Heroin use was up among nearly all demographic groups, but showed particular spikes among women and non-Latino whites.

Researchers say two factors are driving the trend: the rise in abuse of opioid painkillers—drugs that are often a precursor to heroin—and the increasing availability of cheap heroin.

Researchers found that most users reported using at least one other drug in combination with heroin, which contributes to high overdose rates. Between 2002 and 2013, the rate of heroin-related overdose deaths nearly quadrupled, and more than 8,200 people—by some estimates, one in every 50 addicts—died in 2013, according to the CDC.

Experts say too few prescription drug health care providers are properly trained to safely prescribe painkillers, while access to medication-assisted treatment for addicts is too difficult.

Obama’s visit comes as politicians are grasping for a policy response, including presidential candidates in both parties.

Former Secretary of State Hillary Rodham Clinton has laid out a $10 billion plan that promotes treatment over incarceration. New Jersey Gov. Chris Christie has visited drug rehabilitation centers and talked up his work at home to create drug courts that mandate treatment over jail time for non-violent offenders.

Before leaving the White House, Obama ordered federal agencies that employ health care providers to offer training on prescribing painkillers. He also ordered them to review their health insurance plans and address policies that might prevent patients from receiving medication as part of their treatment.

Both steps are relatively modest efforts, given the budget stalemate in Congress. The White House has proposed $133 million for new treatment programs. The administration has said it wants to expand access to medications that can help addict transition off other opioids, and has also pushed to expand availability of naloxone, a drug that can reverse overdose.

The White House also announced commitments from the Fraternal Order of Police to expand training on the use of naloxone. Several pharmacy chains, including CVS and RiteAid, have also agreed to expand accessibility of the drug.

Media companies, including CBS, Turner Broadcasting, ABC, The New York Times and Google, also have committed more than $20 million in advertising space to run public service announcements on the issue.