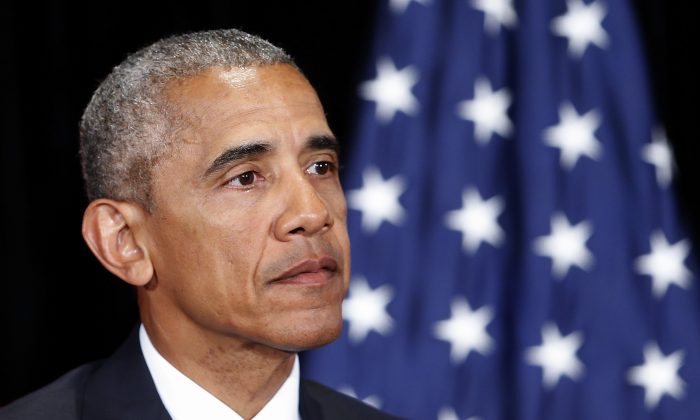 Obama Says Third Party Vote Is a Vote for Trump

President Barack Obama said on Sept. 28 that voting for a third party candidate is like casting a ballot for Republican nominee Donald Trump.

“If you don’t vote, that’s a vote for Trump,” Obama said in an interview on “The Steve Harvey Morning Show.”

“If you vote for a third-party candidate, who’s got no chance to win, that’s a vote for Trump,” he added.

The president said that voters were not enthusiastic about the Democratic ticket in this election because he is not on the ballot, but said that the work his administration has done is on the line.

“My legacy is on the ballot,” said Obama as he urged people to register and vote. “The stakes could not be higher in this election.”

Democratic nominee Hillary Clinton has struggled with her popularity during the campaign. President Obama, First Lady Michelle Obama, former President Bill Clinton, and Vice President Joe Biden have been campaigning for Clinton across the country.

Meanwhile, Senator Bernie Sanders is trying to woo millennials for Clinton. He was popular among the demographic during the primaries, and has been tasked to help the Democratic nominee get more millennial supporters.

A recent poll shows Libertarian nominee Gary Johnson is more popular than Trump among Millennials. Clinton has 34 percent of Millennials, but Johnson is right behind her at 27 percent, while Trump takes 23 percent, a Wason Center for Public Policy at Christopher Newport University poll released on Sept. 26 shows.

President Obama made the case for Clinton during the interview on Wednesday.

“People just do not give her credit, and part of it maybe is because she’s a woman and we have not elected a woman president before,” said Obama. “But here’s somebody who, as I said at the convention, is as qualified as anybody who has ever run for this office.”

Obama also spoke about the first presidential debate, praising Clinton for her debate performance while criticizing Trump’s comments about it being “smart” not to pay federal taxes and how he saw the housing crisis as a business opportunity.

“You know, for someone who wants to be president of the United States, and you’re not thinking about the hardship of foreclosures and people losing their homes and being out on the streets, that your only focus is, how can I make a buck off it? Yeah, that’s not the kind of person that I think we want representing us in the Oval Office,” said Obama.

The president also spoke about Trump’s insults to former Miss Universe Alicia Machado. The Republican nominee had called Machado “Miss Piggy” for gaining weight after winning the competition in 1996. He also called Venezuelan-born Machado “Miss housekeeping.” Clinton brought it up in the debate, noting that Machado is now a U.S. citizen and will vote in November. Trump went on “Fox and Friends” a day later and continued to criticize Machado.

“She was the winner, and she gained a massive amount of weight, and it was a real problem… not only that, her attitude,” Trump said. “And Hillary went back into the years and… found the girl and talked about her like she was Mother Teresa, and it wasn’t quite that way, but that’s OK. Hillary has to do what she has to do.”

Obama criticized Trump for his comments to Machado.

“You had somebody who basically insulted women and then doubled-down, I think this morning, in terms of how he talks about them, and talks about their weight and talks about, you know, how they look instead of the content of their character and their capabilities, which is not something that I want, not somebody I want in the Oval Office that my daughters are listening to, and that sons are listening to, and so, across the board, you know, you’ve got somebody who appears to only care about himself,” said Obama.