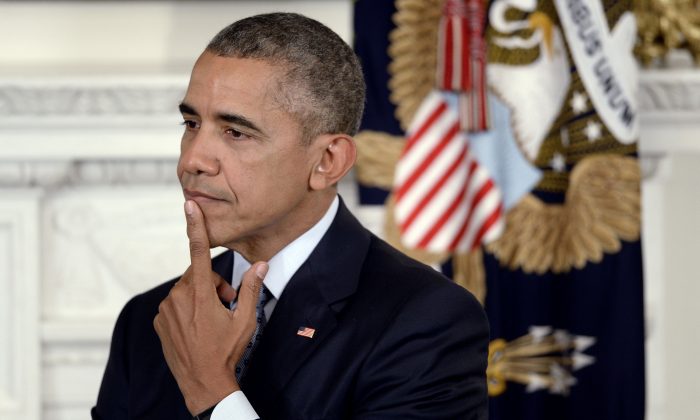 Obama Says Putin Wrong on Syria but No ‘Proxy War’

WASHINGTON—President Barack Obama on Friday vehemently rejected Russia’s military actions in Syria as self-defeating and dismissed the idea that Moscow was strengthening its hand in the region. He vowed not to let the conflict become a U.S.-Russia “proxy war.”

At a White House news conference, Obama pledged to stay the course with his strategy of supporting moderate rebels who oppose Syrian President Bashar Assad, but he dodged questions about whether the U.S. would protect them if they came under Russian attack.

Russia’s dramatic entry into the Syrian civil war, after a year of airstrikes by the U.S. and its coalition partners, has raised the specter of dangerous confrontations in the skies over Syria. And it prompted a question at the news conference as to whether Putin was outfoxing the U.S. at a time when the American-led military campaign in Syria has failed to weaken the Islamic State.

Obama dismissed that idea with an expression of disdain.

“This is not a smart strategic move on Russia’s part,” he said, referring to Putin’s decision to “double down” on his support for Assad by stationing warplanes, air defenses, tanks and troops in Syria. Moscow says it is targeting Islamic State forces and fighting terrorism, but U.S. leaders are skeptical of that and Obama said the Russian president has overplayed his hand.

“It’s only strengthening ISIL, and that’s not good for anybody,” Obama contended. He said he hoped Putin would come to realize that allying Russia with Iran to try to keep Assad in power “is just going to get them stuck in a quagmire, and it won’t work. And they will be there for a while if they don’t take a different course.”

Obama said Putin has stepped deeper into a conflict that cannot be solved by military power alone, and that his approach is misguided in not distinguishing between Syrian rebels who want Assad ousted and those who are terrorists.

“From their perspective they’re all terrorists, and that’s a recipe for disaster,” Obama said in his most extensive comments on the topic since Russia began its airstrikes on Monday.

Evoking the Cold War era of U.S. and Soviet forces working behind the scenes to prop up client states, Obama added, “We’re not going to make Syria into a proxy war between the United States and Russia.”

Asked if he felt out-smarted by Putin, Obama argued that Putin was acting in Syria out of political weakness and trying to gin up support at home while Russia’s own economy struggles.

“As a consequence of these brilliant moves, their economy is contracting 4 percent this year. They’re isolated in the world community,” Obama said, noting that Russia is under international sanctions for its military intervention in Ukraine.

“Russia’s not strong as a consequence of what they’ve been doing. They get attention,” he said. “Mr. Putin’s action have been successful only insofar as it’s boosted his poll ratings inside Russia, which may be why the Beltway is so impressed because that tends to be the measure of the success.”

Still, Russia’s airstrikes have forced the Pentagon to grapple with whether the U.S. should use military force to protect American-trained and -equipped Syrian rebels now that they may be the targets of Russian airstrikes.

Senior military leaders and others are working through the thorny legal and foreign policy issues surrounding that subject and are weighing the risks of using force in response to a Russian attack, U.S. officials said Thursday.

Pentagon leaders have consistently said the U.S. must take steps to protect the U.S.-trained rebels because it would be far more difficult to recruit fighters without those assurances. Defense Secretary Ash Carter told reporters in March that the U.S. has an obligation to support them, “and we’re working through what kinds of support and under what conditions we would do so.”

U.S. officials later made it clear that rebels trained by the U.S. would receive air support in the event they were attacked by either Islamic State militants or Syrian government troops. Currently, that protection would apply only to about 80 U.S.-trained Syrian rebels who are back in Syria fighting with their units.

The U.S. policy so far is very specific. It doesn’t address a potential attack by Russian planes and does not include Syrian rebels who have not been through the U.S. military training.

A key concern is the prospect of U.S. getting drawn into a proxy war with Russia in the event that Russian warplanes hit moderate Syrian rebels who have been trained and equipped by the U.S. military.

The officials spoke on condition of anonymity because they were not authorized to discuss ongoing deliberations publicly.