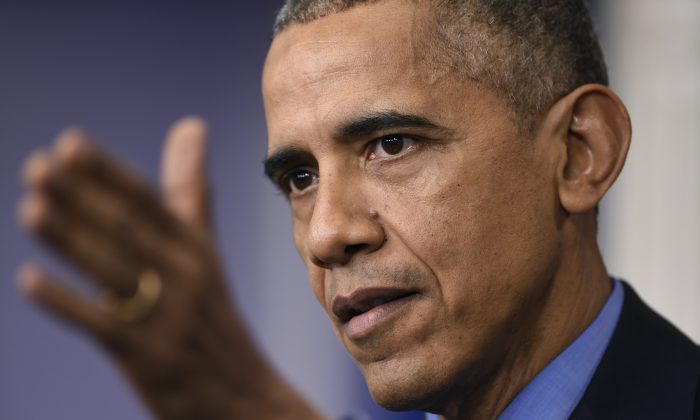 In this Dec. 18, 2015 photo, President Barack Obama speaks during a news conference in the Brady Press Briefing room at the White House in Washington. (AP Photo/Susan Walsh)
Politics

HONOLULU—President Barack Obama, in a broadside against the leading Republican presidential candidate, says billionaire Donald Trump is “exploiting” the fears that working-class men in particular have about the economy and stagnant wages.

In a year-end interview with NPR News, Obama said demographic changes combined with the “economic stresses” people have been feeling because of the financial crisis, technology and globalization have made life harder for those who rely on a steady paycheck.

“Particularly blue-collar men have had a lot of trouble in this new economy, where they are no longer getting the same bargain that they got when they were going to a factory and able to support their families on a single paycheck,” Obama said in the radio interview released Monday. “You combine those things and it means that there is going to be potential anger, frustration, fear. Some of it justified but just misdirected.”

“I think somebody like Mr. Trump is taking advantage of that. That’s what he’s exploiting during the course of his campaign,” Obama said.

Trump has called for temporarily banning Muslims from entering the U.S., and has made inflammatory comments about Hispanics and others.

Obama sat for the interview last Thursday after returning from the National Counterterrorism Center, where he received a pre-holiday briefing on potential threats to the homeland. He said publicly after the briefing that his national security advisers had no specific, credible information suggesting a potential attack against the homeland. Obama left Washington on Friday for two weeks of vacation in his native Hawaii.

Obama told NPR News that criticism of his strategy to combat the Islamic State group was warranted and that the administration’s failure to keep the public informed about his strategy for countering the IS group has contributed to the public’s fears that not enough is being done to protect them.

“I think that there is a legitimate criticism of what I’ve been doing and our administration has been doing in the sense that we haven’t, you know, on a regular basis I think described all the work that we’ve been doing for more than a year now to defeat ISIL,” Obama said, using an acronym for IS.

The group claimed responsibility for an attack in mid-November that killed 130 people in Paris.

U.S. authorities blamed the shooting deaths of 14 people at a holiday party in San Bernardino, California, earlier this month on a radicalized married couple who pledged allegiance to an IS leader in a Facebook post after they had opened fire.

Both attacks heightened fears of terrorism in the U.S. and led to widespread criticism of Obama’s response.

If people don’t know about the thousands of airstrikes that have been launched against IS targets since August 2014, or aren’t aware that towns in Iraq once controlled by the group have been retaken, “then they might feel as if there’s not enough of a response,” Obama said.

“And so part of our goal here is to make sure that people are informed about all the actions that we’re taking,” he said.

Obama outlined the strategy against IS in a nationally televised address from the Oval Office on Dec. 6, days after the San Bernardino shooting. Before leaving on vacation, Obama also tried to soothe public anxiety about attacks on the U.S. through a series of public appearances with members of his national security team following separate briefings on the Islamic State group and on potential threats to the U.S. homeland.

In the interview, Obama urged keeping the situation in perspective, saying IS “is not an organization that can destroy the United States.”

“But they can hurt us, and they can hurt our people and our families. And so I understand why people are worried,” he said. “The most damage they can do, though, is if they start changing how we live and what our values are, and part of my message over the next 14 months or 13 months that I remain in office is to just make sure that we remember who we are and make sure that our resilience, our values, our unity are maintained.”

“If we do that then ISIL will be defeated,” Obama said.

In other subjects discussed in the wide-ranging interview, Obama said:

—Democrats have a “good chance” of regaining control of the Senate in the 2016 elections.

—Campus activism is a “good thing,” but protesters should be open to hearing opposing viewpoints when presented “respectfully and reasonably,” instead of just trying to shut them down.

—The “specific virulence” of some of the opposition directed at him “may be explained by the particulars of who I am.”