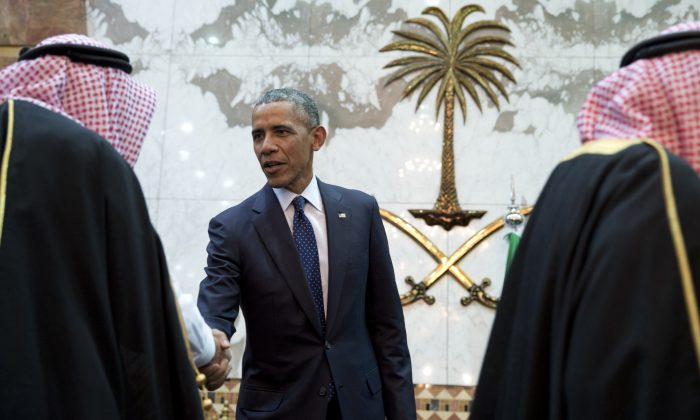 In this Jan. 27, 2015 file photo, President Barack Obama participates in a receiving line with the Saudi Arabian King, Salman bin Abdul Aziz, at Erga Palace in Riyadh, Saudi Arabia. Saudi Arabia and its allies are warning that legislation allowing the kingdom to be sued for the 9/11 attacks will have negative repercussions. The kingdom maintains an arsenal of tools to retaliate with, including curtailing official contacts, pulling billions of dollars from the U.S. economy, and enlisting its lockstep Gulf allies to scale back counterterrorism cooperation, investments and U.S. access to important regional air bases.(AP Photo/Carolyn Kaster, File)
Politics

WASHINGTON—President Barack Obama says Congress’ vote overturning his veto of Sept. 11 legislation was “a mistake” and “basically a political vote.”

Obama also criticized some lawmakers, though none by name, for acknowledging they originally voted for the bill without knowing its contents.

Speaking during a CNN town hall event, Obama said he understands why the override happened, given the perceived political peril of voting against 9/11 families before an election.

But he says the right and harder thing to do would have been to let his veto stand.

Families of Sept. 11 victims will now be allowed to sue Saudi Arabia for its alleged backing of the attackers.

“Overriding a presidential veto is something we don’t take lightly, but it was important in this case that the families of the victims of 9/11 be allowed to pursue justice, even if that pursuit causes some diplomatic discomforts,” said Sen. Chuck Schumer, D-N.Y., a chief sponsor of the bill.

Speaking at a forum in Washington, CIA Director John Brennan said he was concerned about how Saudi Arabia, a key U.S. ally in the Middle East, would interpret the bill. He said the Saudis provide significant amounts of information to the U.S. to help foil extremist plots.

“It would be an absolute shame if this legislation, in any way, influenced the Saudi willingness to continue to be among our best counterterrorism partners,” Brennan said.