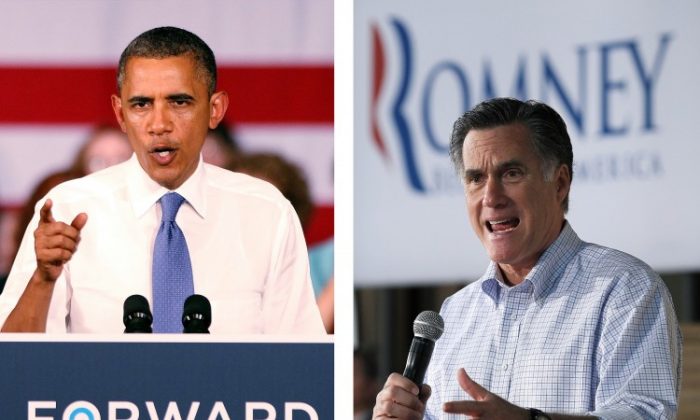 Now that the conventions are over, the battle lines have been drawn as both parties prepare for the next political phase. The November 6, 2012, elections will decide between Obama and Romney who will win to become the next President of the United States. (Justin Sullivan/Getty Images)
US

WASHINGTON—U.S. President Barack Obama and Republican challenger Mitt Romney are preparing for their first presidential debate, Oct. 3, an event critical to both campaigns but particularly for Romney.

Romney is lagging in key states and will have to “come out swinging,” says Dr. Craig Smith, communications professor at California State University–Long Beach, and a former speechwriter to President Gerald Ford.

Smith said presidential debates are key events in political campaigns: “Everyone needs to get sharp … and know what they are doing.”

Obama, he said, will need to be “presidential and stay above the fray and allow Romney to be something of a bull in a china shop.”

Smith said the scrutiny in televised debates was particularly intense adding more pressure to both candidates.

“Television is a very cruel medium. … If you over do things television sees right through,” he said.

This could particularly impact Romney, who he warned would “have to be careful not to overact.”

Dr. Kathleen Kendall, political communications expert at the University of Maryland, says as challenger and lesser known, Romney may have an advantage.

“Our expectations for Romney will be a little lower because we don’t really know him. If he does fairly well that might be interpreted as a great benefit for him,” she said adding that the interpretation afterward is as critical as the debate itself.

The first national presidential debate was launched in 1960 when John F. Kennedy debated Richard Nixon. Nixon an experienced collegiate debater was so “jaded” by the experience writes blogger, Centre College professor, Dr. Benjamin Knoll, that it took another 16 years before another two candidates, Gerald Ford and Jimmy Carter, agreed to debate.

All major television networks screen presidential debates and they will be streamed live online. The debates are now America’s most highly watched event after the Super Bowl, according to Kendall.

The second Obama-McCain debate in 2008 drew 63.2 million U.S. viewers, NielsenWire reported, although that was still way short of the record 80.6 million viewers drawn by Jimmy Carter and Ronald Reagan in 1980.

Preparation for the debates is intense. Both candidates are using the days before the first debate in Denver Wednesday to cram.

Obama is in training in a resort hotel in Henderson, a suburb of Las Vegas, where he is sparring with Massachusetts Sen. John Kerry, as he had done in 2008.

According to Jennifer Psaki, Obama’s traveling press secretary, he has had less time to prepare this campaign.

“It’s difficult to schedule significant blocks of time when you’re the president, regardless of your party,” she said in a briefing Saturday.

The debate prep team, however, has been trawling through both, Romney’s past debates and other Republican and Democrat debates, she said.

Obama said he would not be going for the “best zingers.”

“What I’m most concerned about is having a serious discussion about what we need to do to keep the country growing and restore security for hardworking Americans,” he said while campaigning in Las Vegas Saturday.

Romney admitted the debates “may well be” the make or break moment for his campaign, telling ABC’s George Stephanopoulos that it will be tough.

“Beating an incumbent is never easy. The president exudes an air of likability and friendliness, which is endearing,” Romney said. “But at the same time, I think people recognize that he has not done the job they expected him to do and that he promised he would do.”

Romney has been training with Ohio Sen. Rob Portman, who also trained Sen. John McCain in 2008. McCain says that Rob Portman was so good he still hates him when he thinks of that time and, while Romney was not forthcoming about his experience, he joked, “I will never debate Rob Portman again.”

The first debate, on domestic policy, will, for the first time, be divided into six specific topics: three on the economy, then health care, the role of government and governing.

The decision has drawn criticism for being too restrictive and Smith agrees saying it may take the spontaneity out of the debates and lose audience appeal.

“Releasing topics ahead of time really helps the candidates prepare but it neutralizes the ability to see them think on their feet,” he said.

Kendall says that might be true but she suspects it will make little difference.

“I think the candidates will talk about what they want to talk about regardless of what the topics are,” she said.